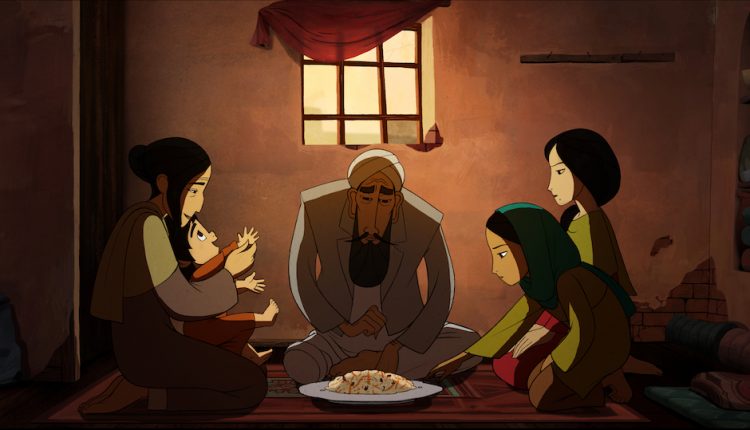 First published in 2000, Deborah Ellis’ novel The Breadwinner follows a young girl who forced to become the breadwinner of her family after her father Nurullah is unjustly imprisoned during the Taliban era of Afghanistan. The book went onto to win several literary awards, including the Peter Pan Prize and the Middle East Book Award in 2002. 15 years later, it is being adapted by Irish animation studios Cartoon Saloon.

Marking the solo directorial debut by Cartoon Saloon co-founder Nora Twomey, The Breadwinner is a far cry from the studio’s previous projects such as The Secret of Kells and Song of the Sea. Focusing on realism rather than fantasy, the film doesn’t shy away from the shocking elements of the original story, notably the treatment of women in Afghanistan and its profound effect on the family. From Parvana cutting her hair and having work low-paid jobs to the sullen resignation of her mother after Nurullah’s arrest, Anita Doron and Deborah Ellis’ emotive screenplay highlights the increasingly aggressive attitude of men towards women and children, which makes uncomfortable watching – but it is something that needs to be watched.

Fans of Ellis’ original novel may see stark differences between that and the film, as a lot of secondary characters and plot elements have been removed to ensure the story focuses on Parvana and her family’s struggles. This prevents further connections outside of the family yet increases the frustrations and pressure on the (practically) all-female household.

Voiced by Saara Chaudry, Parvana is a headstrong heroine whose hopes of releasing her father through pleas highlight a sense of naivety and innocence. The friendship she has with another girl Shauzia (voiced by Soma Bhatia) is sweet and endearing, bonding over their hopes and need to survive.

However, having The Breadwinner animated, rather than live-action, is a brilliant approach. The bold lines and bleak colours capture the desolation of the settings through Parvana’s unworldly eyes, and her peculiar appearance is reminiscent of Sharbat Gula, National Geographic’s famous green-eyed ‘Afghan Girl’. In addition, the fantastical scenes involving Parvana’s fairy tale are charming and wonderfully animated and provide an amusing, visually bright escape that appeals to both adults and kids alike.

Overall, The Breadwinner is a strong debut for Twomey and a beautifully animated adaptation of Ellis’ novel.