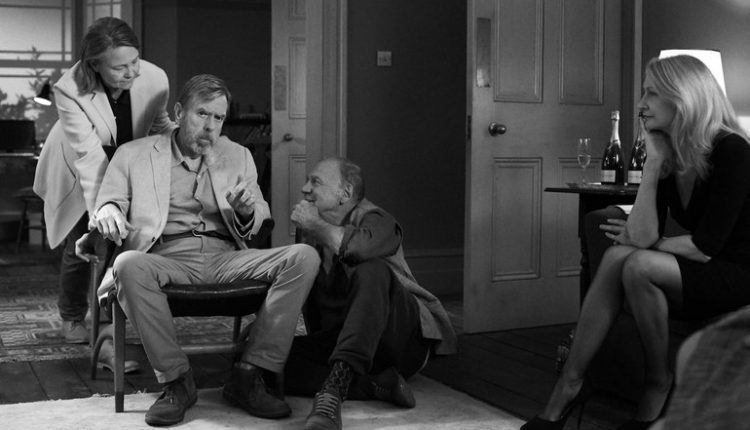 At one point in The Party – the new, viciously dark, comic drama written and directed by filmmaker Sally Potter, a character called April (Patricia Clarkson) tells her partner Gottfried (Bruno Ganz) to “shut up” as his “cliches are unbearable”. Which – in some ways – sums up a film which is full of them. Fortunately – unlike April’s exasperated description of her other-halfs attempts to lighten the mood of the party at its centre, this sharply realised social satire is far from intolerable.

Janet (Kristin Scott Thomas) – who has just been named as the opposition’s Shadow Minister for Health – and her academic husband Bill (Timothy Spall) are holding a dinner party to celebrate her new appointment. However as their friends assemble in the lounge of their bohemian London terrace, the dark truths and secrets of those present are gradually revealed with devastating consequences for them all.

Running at just over an hour, this film with its acid sharp wit, has no qualms about showing the self important members of the political elite for what they really are: often – no matter which side of the political divide you fall on – many people who are overly interested in politics, are quite unpleasant individuals. Whether it was Potter’s intention or not, the film depicts one side of the country’s political and social intelligentsia to be as egotistical and shallow as they claim the others to be. The film also – as said earlier – plays totally to the stereotypical image which most of the public have of those within the upper echelons of the Westminster bubble, as self-serving personalities, totally removed from the reality of everyday life.

Though the party to which Janet has just been elected Shadow Health Minister is never referred to directly by name, it doesn’t take you to be a Westminster pundit to work out on which side of the political fence she and her friends sit: her husband Bill is clearly a radical academic, whilst their dinner guests include ‘free thinking’ lesbian couple Martha and Jinny (Cherry Jones and Emily Mortimer) along with German New Age guru Gottfried and prickly feminist April. Even the seemingly odd man out at the gathering – Tom (Cillian Murphy) a coke-snorting, image conscious banker – turns out to be married to Janet’s PA, so is most likely of the opposite political persuasion in appearance only.

Atmospherically shot in black and white – which initially seems odd in this day of over-lit and hyper colourisation, but which soon begins to grow on you – the light and shade of its monochrome palette, simply highlights the increasingly complex and twisted relationships of the hosts and their five guests. With more u-turns than a government in waiting, Potter’s clever plot – including the witty double meaning of ‘party’ within it – has more zest than a party political broadcast, as well as a great deal more realism.

A neat climatic twist – which finds a central character’s life hanging by a thread – reveals the fakery of the political game for what it really is, no matter which party you belong to. As a result it should be made compulsory viewing for any politician with even the vaguest thoughts of trying for high office.