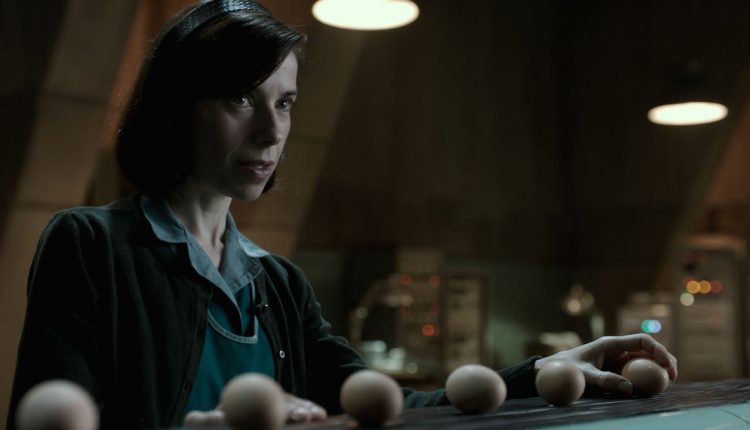 When it comes to Guillermo del Toro, a key theme is throughout his films is fantasy. Whether a comic book adaptation (Hellboy, Blade II) or a science-fiction monster adventure (Pacific Rim), his directorial features have oozed imagination and vibrancy. His latest film, which won the prestigious Golden Lion award at this year’s Venice Film Festival, is no exception.

The Shape of Water is a film about acceptance in the guise of a monster movie. Eliza’s acceptance of a sentient, non-human entity serves as a microcosm of the struggle for racial and of sexual tolerance playing out in 1960s America with the greater, near-Apocalyptic conflict between East and West playing out in the background.

Working in in a governmental laboratory in Baltimore, mute janitor Eliza (Sally Hawkins) comes across the amphibious creature known only as ‘the Asset’ (Doug Jones). Able to communicate, they gradually develop a connection. However, her actions attract the attention of the menacing Colonel Strickland (Michael Shannon). Torn between the military and only assisted by the compassionate Dr Hoffstettler (Michael Stuhlbarg), the Asset’s life is threatened.

From the opening credits, Eliza is shown as a loner, trapped in her lonely wordless world. Her closest friends include her reclusive gay neighbour Giles (Richard Jenkins) and her upfront African-American colleague Zelda (Octavia Spencer). While Giles’ sexuality and Zelda’s race are enough to provoke aggression from some characters in the era, Eliza’s quirky, indifferent nature highlights her acceptance of everyone around her regardless of their skin colour, sexual orientation – or species.

With the elfin Sally Hawkins delivering her most heart-rending performance to date, Eliza is able to connect with the Asset via sign language. Able to ‘speak’ for the first time as an equal, and through this, communication leads to empathy, and eventually, to acceptance.  As a result, the honest, heartwarming chemistry between them displays a humanity against the social and political divisions of the era, proving that communication doesn’t always have to be vocal. The poignancy of the script – co-written between del Toro and Vanessa Taylor – is reminiscent of the silent expression demonstrated in Wall-E.

Those expecting a highly fantastical setting, The Shape of Water is iconically one of del Toro’s most grounded works. Amid its mixture of elements from genres as diverse as musicals, fantasy, romance, and science-fiction, having a story set in mid-20th century Baltimore allows him to critique historical and contemporary social issues to extend the film past its romantic-drama premise.

Conflict is a key theme: between the Soviet Union and America; between the ideals of Strickland and Hoffstettler; and the darker conflict humanity has been waging for millennia. However, the portayal of some conflict – between men of science and war, for example – and the reasoning behind it has been explored in science-fiction numerous times before. Sadly, here a classic troupe feels like a cliché.

With a simple narrative and an endearing heroine amid an emerald green hue and Alexandre Desplat’s gorgeous score, it is hard to deny the beauty of The Shape of Water. Once again, del Toro has raised the bar in his creativity and made an unconventional romance into a stunning fairy tale.