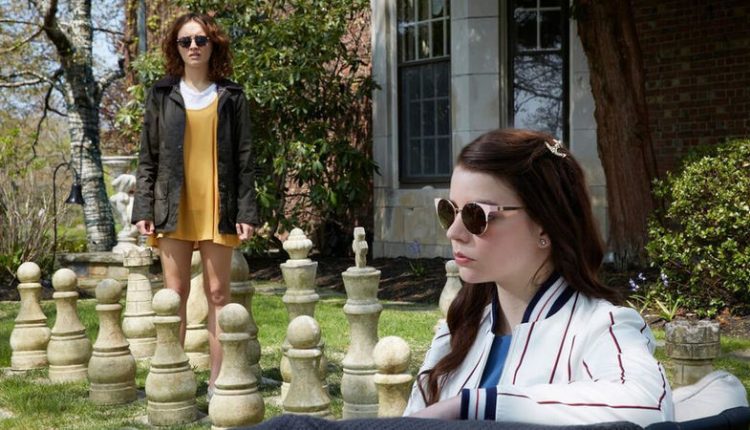 It would probably be misleading to refer to Thoroughbreds – the debut feature by first time writer / director Cory Finley – as a horror film, at least in the generally accepted sense of the term. Having watched it however, there is no denying that this stylishly dramatic thriller is a beautifully chilling piece of filmmaking.

Lily (Anya Taylor-Joy) and Amanda (Olivia Cooke) are two rich schoolgirls from rural Connecticut who, like the horses they own, ooze class and good breeding. They used to be close, but as time passed they drifted apart. Now, at the behest of Amanda’s mother, Lily has agreed to coach her old friend for her upcoming college entrance exams. Amanda soon discovers however that beneath the gilded surface of her ‘perfect’ life, Lily is anything but happy. So between them they hatch a foolproof plan to save Lily from her miserable existence – a plan which couldn’t possibly go wrong.

A film seldom comes along, which looks so good it makes you shiver. Thoroughbreds however, does just that, with everything – its premise, performances and especially production values – dripping simple, understated elegance and class. From the jaw dropping, antique stuffed, Connecticut mansion owned by Lily’s stepfather Mark (Paul Sparks) – think the New York’s Met Museum transferred to the country – where the spoilt adolescent and her family are waited on hand and foot by an army of silent staff, to the only slightly less grand, but equally sumptuous home Amanda shares with her mother Karen (Kaili Vernoff), everything about this film makes you envy how the other half live.

It is this however which is also makes it truly disturbing. Forget that each character, in their own individual way, is perfectly, beautifully, unpleasant, damaged and twisted, or that the real core of the film is an ingenious plan to carry out a nasty and brutal murder. No. The most shocking aspect of the film is the glimpse it allows the viewer into the lives of American East Coast mega rich and their complete removal from reality as the average man would know it, and the fact that these people actually exist, minus the murder or course – hopefully.

The three young cast members – Taylor-Joy, Cooke and Anton Yeltsin (as an unfortunate dropout called Tim, who the girls entangle in their nefarious plan) – whose relationship forms the centre of the story, are marvellously cold and sardonic, double-crossing one another as the story works towards it conclusion. An extra poignancy is added to Yeltsin’s performance when it’s remembered he died within a few months of filming finishing in a tragic accident at his home in the Hollywood Hills.

As with all the best thrillers Thoroughbreds depends very much on its surprise ending, which is smartly executed even if it does – disappointingly – stretch the credulity of an otherwise, generally, believable plot. However it’s all done with such panache and its mostly unlikable characters, on-the-whole deserve their comeuppances, that viewers will be happy to excuse it when the plot, occasionally, stretches it a bit far.

You have to keep reminding yourself throughout the film, that Thoroughbreds is the first piece of work that Finley has actually done for the screen: search out his IMDB biography, and it is literally the only thing which comes up under his entry – none of the typical faffing about with TV episodes or filmic shorts, which seems the means of entry to the big time for most would-be filmmakers nowadays. Going by what we see here, this clearly talented young man is one to watch.