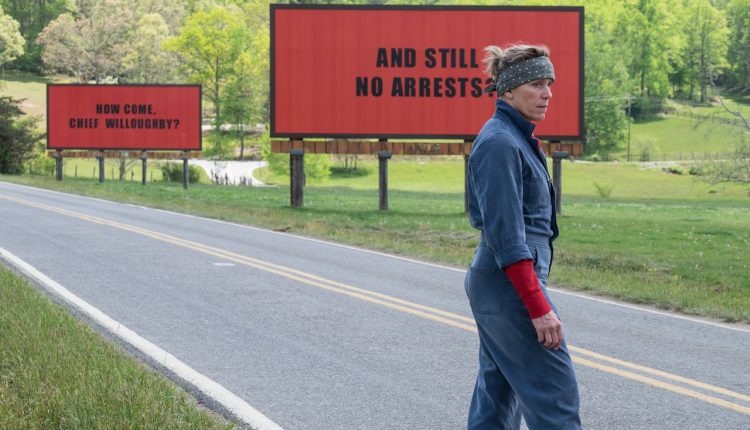 Known for films such as In Bruges (2008) and Seven Psychopaths (2012), British filmmaker and playwright Martin McDonagh returns to the directorial chair for this dark comedy-drama. Reuniting with recurring collaborators Woody Harrelson and Sam Rockwell, his latest film won the prestigious People’s Choice Award at the recent Toronto Film Festival.

Three Billboards Outside Ebbing, Missouri is about Mildred Hayes (Frances McDormand), a woman who hires the titular three billboards outside the town to criticise the local police for failing to catch her daughter Angela’s killer.

In one way, Mildred’s bold actions can be interpreted as an act of war against the police, specifically Willoughby (Harrelson) and his associates. Facing threats from the local community, her ballsy defence highlights the fact that she isn’t going quietly, and neither are her billboards. Her behaviour echoes the desperation of a grieving, powerless parent who is haunted by her daughter’s ghost. It is an emotional element that anchors the narrative, while McDonagh’s dark humour balances the bleak and violent circumstances of Angela’s fate.

The offensive yet hilarious screenplay is definitely one of the best of the year, and Frances McDormand delivers a powerhouse performance as Mildred, an unexpected badass with a deadpan sense of humour. Surprisingly, Ebbing’s police officers – specifically, the compassionate Willoughby and temperamental Dixon (Rockwell) – are not the assumed bad guys. Seeing them struggling with their own personal issues allows Mildred to look past her anger and see them as they are – two Average Joes. Supporting actors Lucas Hedges, Caleb Landry Jones and Peter Dinklage do not go unnoticed, delivering wry wit and memorable one-liners.

Occasionally wince-inducing but incredibly gratifying, Three Billboards Outside Ebbing, Missouri is a 115-minute hoot. With a commanding performance from McDormand, this is Martin McDonagh at his best.