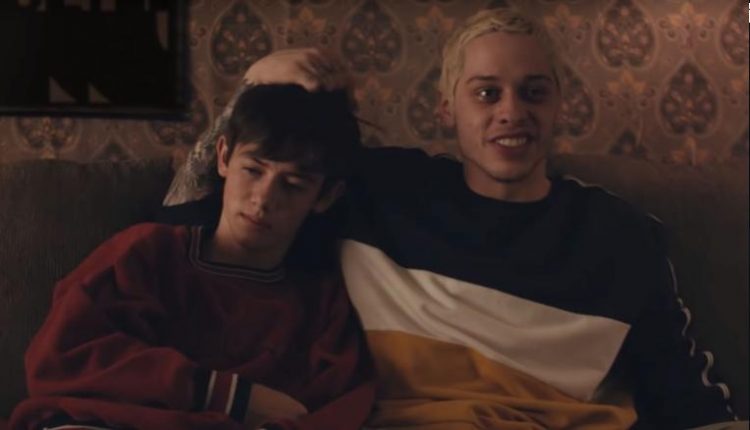 Perhaps some props can be given for casting Saturday Night Live product and tabloid rogue Pete Davidson as a twenty-something slacker mentor to an out-of-touch teen needing some wacky-minded guidance. Writer-director Jason Orley–whose previous collaboration with Davidson involved being credited with the SNL comedian’s stand-up special Alive from New York —taps the youthful funnyman into service once again with the clumsy coming-of-age farce Big Time Adolescence.

Now one has to give credit where credit is due because Davidson is richly mined for the comedic choppy material conveyed in Orley’s brainchild of a mismatch buddy romp. After all, Big Time Adolescence is about detailing the nutty bonding of an adult stoner whose questionable mentorship methods liberates his awkward teenage charge. Indeed, the unfiltered Davidson is considered the ultimate pin-headed pilot to navigate this turbulent plane of growing pains for his impressionable admirer. Also, there is a hint of touching sentiment surrounding the film’s directionless dimwit and his teen tag-a-long.

So why does Big Time Adolescence not register as much as this “clownish cad-and-the-young-lad” comedy should on paper? Orley’s first time feature certainly has the potential to promote Davidson as the reckless rogue blessed with charming disdain and there are occasional moments where the lunacy bits are inspired. However, Big Time Adolescence simply does not elevate Davidson’s banal role model beyond the similar showcasing of entertaining chuckleheads we have all seen countless times before. Hence, Big Time Adolescence feels recycled, slightly monotonous, and hammers the same old smirkish nails about a shifty man-child that refuses to adhere to conformity. For scoring the unrestrained Davidson as the lead rascal one would think that Adolescence would invite something more freshly raucous that does not echo the usual conveyor belt of stoner-based chuckles.

Zeke (Davidson) is the real deal in the selective viewpoint of his star-struck mentee Mo (Griffin Gluck). According to Mo, Zeke is the idealistic rebel that has been responsible for opening his virgin eyes to the real world. Zeke is the bad boy that has offered a forbidden education to the impressionable Mo looking for a teacher/big brother to lean on for reassurance. To 16-year old Mo, the corrosive cadence of aimless Zeke is infectious. How can one not appreciate the coolness of a drop-out such as the 23-year old Zeke who enjoys marching to the beat of his own destructive drum?

Zeke represents to Mo the free-wheeling player not compromised by boring boundaries. Seemingly, Zeke is blessed with a new girlfriend Holly (Sydney Sweeney) while working at an appliance store that does not challenge or ask much of him. Zeke’s downtime consists of pot-smoking, playing video games, hanging out with the guys at the mall, chugging down beers, etc. Basically, Zeke has not changed in all the handful of years since Mo has known him. One guesses that favorable points are added for Zeke’s scoring in consistency courtesy of Mo’s approval rating. In short, Zeke can do no wrong when it comes to the overall expectations set by an enamored Mo.

From Mo’s perspective, he pretty much lives a stillborn existence. Mo does have a supportive father in Reuben (Jon Cryer) and his sister Kate (Emily Arlook) is no stranger to mingling with older, unconventional guys. In terms of Zeke, he represents to Mo the wishful thinking to not play it safe and entertain his wayward whims. Some young lads that cannot get out of the way of their own awkward transgressions predictably gravitate to an off-the-wall cool dude such as Zeke. In theory, Zeke is the unorthodox superhero to kids such as Mo just looking for validation.

Davidson definitely sings for his supper effectively portraying a clueless wonder Zeke just existing within the peripheral of throwaway nonsensical behavior. Whether arbitrarily deemed dangerous or dopey Davidson’s nutty take on a carefree drifter with fleeting ambition is what periodically drives Big Time Adolescence to its occasional promise of both wackiness and wistfulness. Plus, the give-and-take chemistry between Davidson’s Zeke and Gluck’s Mo is highly serviceable. Aptly, the shifty shenanigans of an SNL-bound Davidson certainly gel well for Orley’s flippy father figure Zeke.

The main problem is that Big Time Adolescence has nothing else to hang its hat on in addition to Davidson’s colorful chaos of a goofball. Conversely, Orley has a playful grasp of the material and Davidson’s Zeke is worthy of the mockery being perpetrated. Still, the obligatory set-up of the Zeke-Mo tandem fails to deviate from the familiar childish antics of an older malcontent mentoring an empty-feeling teen vessel. Unfairly, Big Time Adolescence suffers from the standard formula of routine coming-of-age comedies that follow the predictable pattern of snarky amusement and surfacing angst.