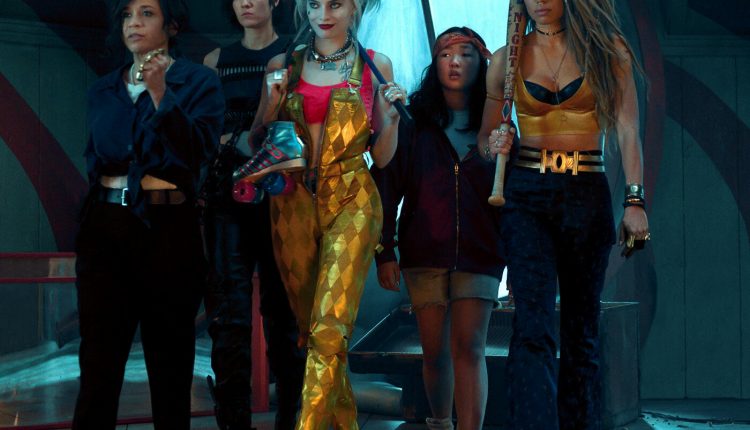 Birds of Prey decides to abandons the “Why so serious?” tone of its predecessors and instead screams “Let’s put a smile on that face!”

After breaking up with Mr J, Harley Quinn finds herself at the top of everyone in Gotham’s Most Wanted list. In particular, the unwanted attention of the Gotham City PD and wannabe crime lord Roman Sionis aka Black Mask.

The DCEU’s attempts to replicate the success of the Marvel Cinematic Universe have been mixed to say the least. One aspect in which they have struggled is finding a suitable and consistent tone. Wonder Woman was bright and hopeful but Batman V Superman was too dark and depressing and Suicide Squad? Well that hot mess of a movie had no firm idea of what it wanted to be. One thing everyone could agree on however was the strength of Margot Robbie’s performance as Quinn.

Free from the explosive shackles of the squad, and The Joker, Quinn steps up to take the audience on a Deadpool-style adventure full of voiceover narration, flashbacks, fourth wall breaking and Easter eggs.

Yes it is a comic book movie. But it is also, at its heart, a empowering break up movie. A story about a woman who learns how to exist outside the confines of the Joker’s shadow and forge her own identity free from the ties that bound her. Plus she can do it with a little help from her (female) friends.

Margot Robbie is on the crest of a wave right now. From OUATIH to Bombshell to this, she proves she has incredible talent and range. She takes Quinn from an object of the male gaze in Suicide Squad and turns her into a feminist icon. One who is engaging but dangerous, yet also vulnerable and sweet. She is Thelma AND Louise all rolled into one.

The film’s title may promote The Emancipation of One Harley Quinn but it is actually the emancipation of the DC universe’s female characters from the drab, depressing and dark world of the “super” men moping around dealing with the loss of their parents called Martha.

Behind every Superman is a super woman and behind them are great female writers and directors. Just as Patty Jenkins was critical to Wonder Woman‘s success, Cathy Han and Christina Hodson put their stamp on BoP.

The film is full of lovely little touches that only a female writing-directing team would have thought of. For example, during one of the (fantabulously produced) fight scenes, Harley hands Black Canary a hair bobble so she can tie her dreadlocks back to avoid them getting in the way. One overwhelming note of positivity is the way the women come together to fight a common enemy. Rather than fight amongst themselves and screw each other over for the male antagonist’s approval or validation.

And it goes without saying that this passes the Bechdel Test with flying colours. In fact, there is so much colour in this film, from the pallette of the costumes and production design to the characters and salty language, it could have been called Birds of Paradise instead of Birds of Prey.

If there is a weak link in the chain, it is the men who let the side down. Ewan McGregor is clearly having a blast as Black Mask. However his performance is not over-the-top enough to match Margot Robbie’s now iconic antihero. Simultaneously he is not twisted or dangerous enough to feel like a genuine threat. Plus any film that features a sequence set to Diamonds Are A Girl’s Best Friend and doesn’t utilise McGregor’s musical talents to go full-Moulin Rouge is a wasted opportunity.

Plus for a film called Birds Of Prey, it feels very much like a Harley Quinn… AND the BOP movie. Mary Elizabeth Winstead makes a great impression come the final act but with the spotlight clearly on Harley, the joke is on the other characters at this point.

Like the margaritas Miss Quinn enjoys so much, you will have a blast during those wild 110 mins but looking back on the night you might find yourself with a bit of headache, wondering if it was actually as good as you remember.