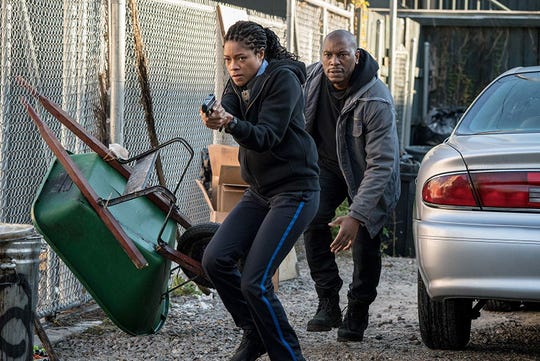 The urban cop thriller Black and Blue certainly sounds off its siren of modern-day outrage that encompasses everything from questionable policing procedures to the racial strife of black communities impacted by such corruptible law enforcement practices. Indeed, this message-driven cop caper echoes the real-life frustration of contemporary times where targeted disenfranchised African-American males and shady racist police officers make for a deadly combination. However, it is too bad that such hostile societal observations in Black and Blue are contained in a generic, clunky action-pack spectacle that undermines its profound presentation about police corruption and minority alienation.

Director Deon Taylor (“The Intruder”, “Traffik”) aims to tap into the grittiness of police brutality and black disillusionment but the so-called high stakes of authoritarianism and racism is packaged within a manufactured suspense piece simply doing too much with its excitable transparency. The liberating factor that is quite refreshing is the female lead heading up this streetwise actioner in the form of Academy Award-nominated actress Naomi Harris (“Moonlighting”) as an embattled police office trying to maneuver through the crisis involving the baddies on both sides of the law wanting her harried head on a platter. However, screenwriter Peter A. Dowling (“Sacrifice”, “Reasonable Doubt”) conjures up a jittery script that trivializes the heavily themed discussion of lawlessness and inhumanity in favor of another bouncy revenge romp triggered by tactical tension and thrills. In the long run, Black and Blue merely registers as a cheesy hit-and-run cop drama that marches through its familiar beat.

Afghanistan vet Alicia West (Harris) returns to her New Orleans hometown as it is overcome by city-wide ruin. Now trying to make a difference on the police force to better her impoverished community Alicia is stuck between a rock and a hard place. Her fellow officers do not seem to cater to her presence while the local civilians may consider her a sellout donning a badge. Nevertheless, Alicia is put into a more precarious situation when she happens to record via her bodycam the unlawful beatdown killing of a black young drug dealer by a group of shady narc cops. Thus, Alicia West is now being hunted down for the incriminating footage that could very well spell disaster for the crooked cops whose excessive manhandling of the black violator’s spilled blood is damaging evidence to say the least.

Fittingly, Alicia’s dilemma is twofold: on one hand she must look over her shoulders constantly as the demonized cop killers and the territorial riff raff demand for her to be silenced. On another hand ,Alicia needs to seek protection from the same jeopardized region that basically want to cancel her out period. Thankfully, the one person willing to step by her side is convenient store manager Milo “Mouse” Jackson (Tyrese Gibson). Mouse can sympathize with Alicia since he has been harrassed countless times by the racist police officers that have made him feel inadequate and tormented. So the least that Mouse can do is ensure that Alicia stays ahead of the uniformed detractors looking to eradicate her on the spot.

The dastardly narcs that caused the death of the drug-dealing youngster–Terry Malone and Smitty (Frank Grillo and Beau Knapp)–are going to make life very difficult for the fleeing Alicia. In fact, Malone has spread the word around the police department that Alicia must be stopped at all costs. Also, Malone has falsely whispered in the ear of notorious gang leader Darius (Mike Colter) that it was Alicia’s dirty endeavor in causing the death of his drug-pushing nephew. So the injured Alicia (courtesy of Smitty’s bullet penetrating and partially wounding her) escaped but now has to nurse her wounds while on the run. The heat is on as both Malone and Darius furiously seek out the endangered rookie cop. Can Alicia, with Mouse’s generous assistance, withstand the smoking mirrors of evil forces wanting to terminate her once and for all?

Consequently, Black and Blue morphs into another synthetic shoot ’em up actioner that toils in arbitrary cliches while ditching the promising premise it proposed–the demise of blackness at the horrifying hands of contemptible cops. Taylor has tiptoed into the foray of black-and-white psychological conflict before but Black and Blue remains more steady in its perceptive take. It is too bad that Taylor opts for pseudo slick-action, hackneyed dialogue, run-of-the-mill caricatures, and sketchy tension to allow Black and Blue to flourish as it ends up betraying its well-meaning messaging about distrust and deterioration among policing methods and people of color.

The good news is that both Harris and Gibson bring colorful conviction to their roles as the marginalized pawns situated in a municipal malaise of chaos and confusion. Harris has seen her mixed bag of action flicks from the treasured 28 Days Later to the flimsy and forgettable Dwayne Johnson-starring vehicle Rampage. Plus, The Fast and the Furious’ Gibson is actually a revelation as a put-upon black man hampered in the life-long struggles of dealing with the stressful policing pressure and paranoia. Both performers bring some depth and dimension to the scattershot intrigue that lingers in this mediocre dirty-cop thriller. Again, it is a thrill and inspiration to see Harris headlining an action-oriented movie with seriousness and purpose. Unfortunately, the pedestrian material cannot keep up with the solid performances as produced by the duo of Harris and Gibson.

A bit distracting are the broad strokes that Taylor incorporates to show just how despicable the down-low cops and criminal cretins can be in exaggerated doses. Nothing feels remotely measured or plausible concerning Grillo’s over-the-top noxious narc or Colton’s flashy and fearful gangbanger all served up too easily in overdrawn, dramatic stereotypical fashion. Black and Blue wants to make the cemented point about poisonous street life but the film fails to really delve into the tortured psyche it refuses to aptly examine on a coherent level.

Although mildly contemplative, the cockeyed conjecture in Black and Blue is not a very arresting narrative for this disjointed cops-are-crooks joyride.