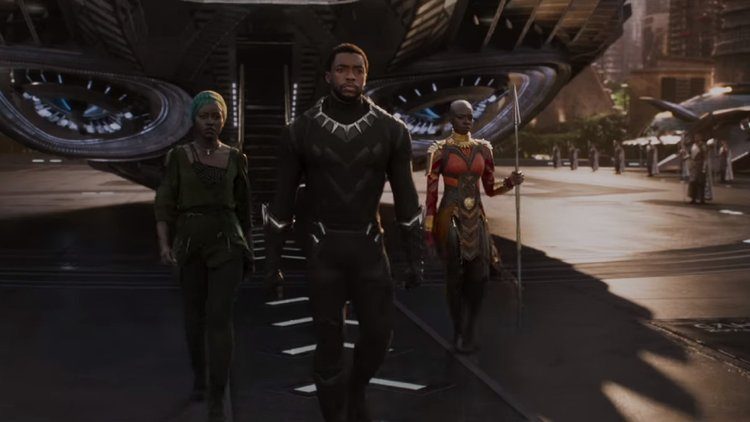 Last year, Hidden Figures was a surprise hit. Becoming last year’s highest-grossing Best Picture nominee in the US market, the film proved that a leading cast of African-American actors is not a limitation to box office success. Now, Fruitvale Station and Creed director Ryan Coogler is making his mark in the Marvel Cinematic Universe (MCU) with one of the most groundbreaking superhero films in recent history.

Set after the events of Captain America: Civil War, Black Panther sees T’Challa (Chadwick Boseman) take his place as the new King of Wakanda. However, his throne is threatened by the presence of Erik Killmonger (Michael B. Jordan), a young man with a mysterious past.

The lack of diversity in Hollywood is a constant source of irritation, but Black Panther addresses this by standing proudly as a ‘black’ film. With Danai Gurira, Lupita N’yongo, Daniel Kaluuya and regular collaborator Michael B. Jordan among the cast, as well as veteran actors such as Angela Bassett, Forest Whittaker and John Kani, Coogler quickly sets a sense of pride and authority in his message – that this film belongs to people of colour.

There are distinct political themes running through Black Panther. From Wakanda’s isolation from the outside world to Killmonger’s somewhat extremist ambitions, it highlights a myriad of sociopolitical issues – such as the risks of globalisation versus the safety of colonisation – that is uncommon in a superhero film. While Coogler and Joe Robert Cole’s screenplay is comical at times, it doesn’t shy away from the realism of its characters and its stance on identity.

Unlike other origin films in the MCU, there is no lingering insecurity over newfound abilities. Instead, T-Challa is finding his place as the king and driven by his duty, is going headfirst and tackling on immediate threats in a controlled manner. Looking comfortable as the eponymous character, Boseman presents our hero as humble and graceful, while exuding a confidence that is not overly arrogant. Jordan delivers an equally confident performance as Killmonger, whose bitterness and confidence provides a perfect foil for the calm and collected T’Challa.

Black Panther also makes an impression with regards to its representation of women. While MCU fans are screaming for a solo female superhero film, Black Panther ticks the boxes in delivering impressionable, strong and confident female characters. From Gurira’s agile General Okoye and her all-female army to Letitia Wright’s sassy technical genius Shuri, the film doesn’t shy away from the idea that women can play a larger role to a superhero film than the love interest or damsel in distress – a message that will surely be taken into consideration with future Marvel releases Ant-Man and the Wasp and Captain Marvel.

While Fruitvale Station and Mudbound cinematographer Rachel Morrison’s beautiful cinematography complements the incredibly ambitious action scenes, there is occasionally inconsistent pacing and unnecessary sentimental moments involving T’Challa and Erik’s loved ones, as they slow the action down only for it to resume at full speed.

Despite it being the 18th film in the MCU, Black Panther feels as new and refreshing as Iron Man, as Coogler’s confidence in both the story and his talented cast has enabled him to create an enthralling yet indispensable installment in the series.