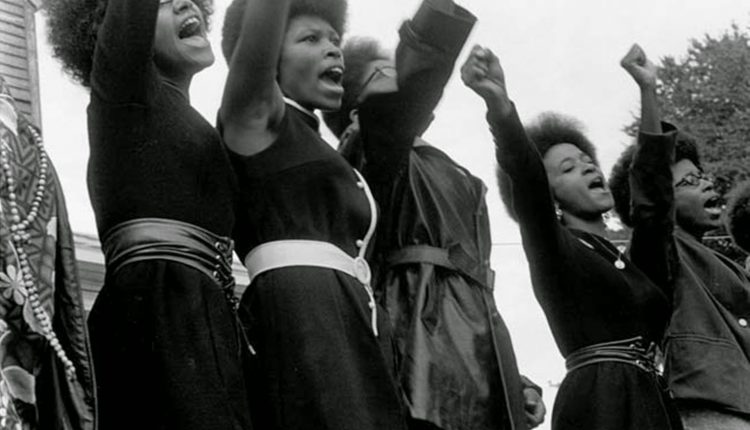 Black Panthers: Vanguard of the Revolution (2015)

The Black Panthers: Vanguard of the Revolution is Stanley Nelson’s fantastic, comprehensive account, made for PBS, of the historic rise to power and eventual demise of the Black Panther Party. The film charts their rise from militant protectors of the people, in response to the brutal handling of black citizens at the hands of over-zealous and oppressive white police officers, to militant force in their own right, to idealogical powerhouse. Eventually we see them as a party torn apart by a massive philosophical split and infighting.

The film begins where the story begins, in Oakland in 1966 just a year after the assassination of Malcolm X, even though the problems themselves had begun years earlier in Mississippi, and we see footage of police shock tactics that is truly horrific. Out of these terrible times and their social repercussions rose a man, Huey Newton – young, idealistic and black, and, more importantly, legally savvy. He formed what can only really be described as an armed, inactive vigilante group. He and his fellow members would be present and armed at confrontations with the white police force and would intimidate, through legal shows of force, the police into acting within the bounds of the law and the perceived moral code. They considered themselves to be the vanguard.

At their height, the BPP were led by a triumvirate of remarkable characters. Huey Newton was the visionary, their Minister of Defense; Bobby Seale was the personality and Eldridge Cleaver was the literary figurehead and spokesman. Such was their power and organisation that they were able to storm the floor of the State Legislature, fully armed, and led a rally against the racist legislature. The Vanguard had become a party and was well on its way to being an army. William Buckley insisted they were a Movement. Just as they were beginning to gain respectability, so they began to draw the attention of the FBI. They also, however, were gaining more and more support, partly due to their great look (the leather coats and polo-necks are still iconic to this day) and partly due to their rallying cry of “Power to the people”. This message is shown us through footage of rallies, images of artworks, graffiti and the songs of followers and times.

At about this time the infighting began though, mostly along gender lines. By the end of the 60s most of the rank and file of the party were women. This came to a head when, 1967 Huey Newton was arrested and convicted of the murder of police officer John Frey and in 1968 Bobby Seale was arrested and charged with inciting the riots at the National Democratic Convention. This led the BPP to be considered by many an anti-police party, with Cleaver very dangerously playing up the “us against them” rhetoric. He was convinced he had a point. The murder of Martin Luther King on April 4th was the last straw, and it was the party’s reaction to his death that would be the its legacy. Cleaver would lead them into battle only to surrender later in 1968, after which he disappeared to Algeria where founded an international branch of the BPP and was generally seen to be hanging out with some very dangerous people.

With Newton and Seale in jail and Cleaver effectively in exile, it fell to David Hilliard to take control. However, with the party weakened, in 1969 Nixon gave J Edgar Hoover free reign to react to the BPP as he will. The entire New York leadership of the party was charged with terrorist activity and the Panther 21 all charged and sent to jail, despite many successful fundraisers. This did not sit well with those left behind. The Vanguard of the Revolution was rapidly becoming the revolution itself. Fred Hampton now led them, though his bodyguard was an FBI plant, and after a series of FBI raids during which Hampton was wounded and died. After this, there were more police stoppages, racial tensions was boiling over rapidly, culminating in a huge shootout at the Party headquarters.

In 1970 Newton was released from jail. In Algeria, the party was being denounced by Cleaver, though he did offer support for the Panther 21 who had recently been expelled from the party, meaning the BPP was now effectively split in two and erupted into violence. In 1972, Bobby Seale, who was in jail for the split, entered legitimate politics and ran for the mayor of Oakland. Now with Seale engaged in this running and Cleaver gone, Newton fell into a life of crime and drugs and was eventually shot and killed in Oakland by Black Guerilla Family member (and former Panther) Tyrone Robinson.

This film really is a complete history of the BPP and its times, and has been lovingly assembled from an incredible selection of archive footage and interviews with all of the main players, most notably the three leaders themselves along with Kathleen Cleaver (BPP member and wife of Eldridge), Emory Douglas (BPP Minister of Culture who’s artwork brought the era alive) and a host of others, including cultural commentators and the FBI agents themselves. Notable by his absence though is Stanley Nelson himself, who has appeared in other documentaries on the times. The film definitely belongs to the footage though. The access that Nelson and PBS had to the archives is immense and the film is alive and humming with a sense of revolution and an utmost regard for the manifestation of ideals in history and society.

This is a forceful film, about forceful subject matter. It’s also a timely one, that is becoming increasingly relevant to America today. It shows us controversial characters and their sometimes controversial ideals yet is never proselytising. There is a weight of history here, culturally and emotionally and yes, racially, that Nelson handles with ease. There is no flashy style or shiny coating, the film shifts between footage and witnesses seamlessly and has the feel, despite the great music and amazing images, of a serious historical news documentary executed flawlessly.

It was an absolute pleasure to welcome Stanley Nelson to the Sheffield Doc/Fest to discuss this film, and hearing him speak about it and it’s relevance to today was fantastic.

Definitely the film of the Festival.

THE LIFE OF A GENIUS – Orson Welles: The Great Disruptor