As the mumblecore aesthetic continues to up its budget and extend its technical range (its makers can afford boom mics now), so too has its adoption of horror sub-genres journeyed beyond a prevailing vogue and morphed into a kind of extended thesis, or niche hybrid of high and low cultures; the intellectual, thirty-something cinematic DJ’s of a lo-fi movement engaging with the tropes and trappings of a once outlawed cinema. Jay and Mark Duplass were first to ignite the flame with their meta home invasion horror Baghead (2008), and it’s no coincidence that the writer -director duo are executive producers on Black Rock, a taut and brutal re-imagining of the Day Of The Woman film. It’s no coincidence either that it arrives hot on the heels of Adam Wingard’s serial killer thriller A Horrible Way To Die (2010), Joe Swanberg’s werewolf horror Silver Bullets (2011), and Wingard’s own home invasion flick You’re Next (2011), in cinemas now. 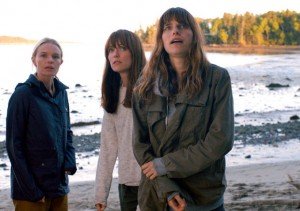 The story concerns three female friends, Abby (Katie Aselton; also directing husband Mark Duplass’s script), Lou (Lake Bell) and Sarah (Kate Bosworth), who are taking a camping trip to a secluded island in order to make amends for a past misdeed, which split them up over six years ago. While there they encounter three ex-soliders hunting deer in the dense woodland. A drunken night where Abby becomes too flirtatious with the male leader, Henry (Will Bouvier), leads to an irrevocable tragedy which will set the three women running for their lives…

It’s during this event, and in the scene directly afterwards that the film splices its horror DNA, the plot becoming half The Most Dangerous Game and half I Spit On Your Grave. Its sole point of interest for horror fans is that it never technically becomes a rape/revenge film, stopping short at a point where the lines of morality are not so much in question (the men are bastards and villains, clearly) as troubled by an uncommon distortion of male/female points of view; was it Abby’s drunken flirting which instigated the night’s events, or were the men’s intentions sour all along? 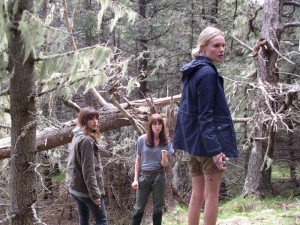 The women aren’t to blame, of course, but Duplass and Aselton at least attempt to re-enagge perceptions of blame – it’s a shame then that their plot wouldn’t fill the back cover of an airport paperback, and falls quickly and lazily into cliché. The men turn too quickly into primal savages, and the women become idiots in service of set-pieces (the most gratuitous and inexplicable of which finds them shedding their clothes and walking around completely naked for ten minutes of the final act), any tension nullified by the writer’s and director’s complete lack or originality or invention.

It is during this sequence of extended nudity that our women turn from (literal) babes in the wood to hunters of their own hunters, the heavy-handed imagery finding their au naturel bodies hunched over the woodland like cavewomen, making killing tools from bark and bits of rock. The eventual ridiculousness of the plot, which is at least quite well directed and structurally compressed (the film clocks in at 72 minutes), sadly nullifies any suspense, all of which is rustled up by the performances of its three leads. 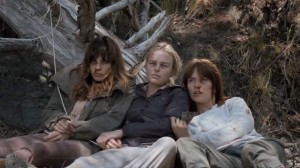 Aselton fares best of the trio, with Bosworth’s earliest scenes slipping as they usually do into smiley and mannered pantomime (she wears every gesture on her sleeve, working at double the tonal register than is required), and Bell hitting the notes that her character has to for the plot – she is both the catalyst for the friend’s past dissolve, and an agent of its reunion. It’s not even that Aselton hands herself the best part – a poorly calculated back-story and that horrible scene of nudity makes sure of that – but more that she acquits herself best to the film’s tone (perhaps not a surprise given that, as director, she’s in charge of creating it).

Bookended by two throttling tracks from The Kills (“You Don’t Own The Road” and the brilliant “Future Starts Slow” from their latest record), the film at least sounds good, with the latter track’s opening rhythm, a big, cluttering horror bassline if ever there were one, mixed into Ben Lovett’s score for a brilliant introductory theme that the film just never lives up to. It’s a completely average experiment hampered by some awful dialogue and misjudged set-pieces; not awful, but almost completely forgotten the minute it stops.