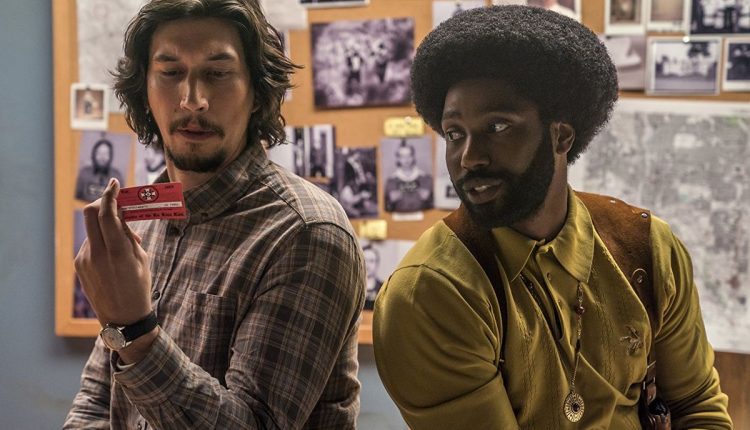 It is fair to say that Spike Lee‘s recent filmography has been questionable. Best known for features such as Do the Right Thing, Malcolm X and Jungle Fever, his 2013 remake of Korean neo-noir Oldboy and the 2015 musical crime drama Chi-Raq didn’t reach the same critical acclaim. However, his latest film – based on a biography by a retired policeman – marks a return to form, after a triumphant debut at the 2018 Cannes Film Festival where it won the Grand Prix award.

Revisiting Lee’s cinematic niche of highlighting racism towards African-Americans, his latest feature sees him highlighting this issue from the perspective of a person of authority – in this instance, the ambitious Stallworth, a protagonist who is capable of making a difference but is ultimately hindered by his race.

In fact, the film feels like a tug-of-war; on one side, the African-Americans who are vying to be noticed, and the other, the white racists who are on an imprudent mission to ‘cleanse the Earth’.  These evident polar opposites help modern audiences to identify the heroes and villains of the film, yet their respective stances contemplatively challenge their opinions on racism and its socio-political consequences.

Between the student rallies promoting ‘Black Power’, led by headstrong president Patrice (Laura Harrier), to the hateful, non-filter meetings of the KKK, the level of radicalism between the white and black characters is uncomfortable and occasionally comes across as all-talk, no-action, but a scene with a KKK initiation cleverly intercut with an intimate student gathering featuring Harry Belafonte builds this tension to a devastating peak.

Even though BlackKKlansman‘s dramatics easily outnumber its comedic moments, the latter are fortunately memorable enough for audiences to remember that the film is not all about hate. Washington is charismatic as the ballsy Stallworth, while Driver is effortless as Jewish officer Zimmerman, perfectly fitting into his undercover role and remaining stone-faced calm when hate is literally staring him in the eye. On the other side, unstable KKK member Felix (Jasper Pääkkönen) and simple yet ominous Grand Wizard David Duke (Topher Grace) provide both unintentional comic relief and necessary tension, which leaves audiences on the edge of their seats.

The coup de grâce of BlackKKlansman is the real-life footage of the 2017 Charlottesville rally at the end of the film, which resulted in the deaths of three people and more than 30 injured people. As it highlights the devastating effects of racism in modern society, this somewhat significant inclusion delivers an emotional sucker punch that stays with audiences past the credits – and the horrifying realisation that this hatred hasn’t dissipated more than 30 years later.

In BlacKkKlansman, Lee is back to what he does best, as he and his talented cast deliver one of the most evocative films of the year.

BlacKkKlansman is released on August 24th