With Blackmail we have a full-fledged twisty Hitchcock crime thriller. He must have had fun with this one; no wonder he did both a silent and a sound version. There are many ingenious visual moments, including not just one but two cameos by Hitch himself. There’s a whole string of notable set pieces, including an opening “police procedural,” an entrapment-murder, and a grand scene of small figures chasing around on a dome over the city of London.

Blackmail was adapted from a play by Charles Bennett. And it provides good material. Alice White (Anny Ondra), a London girl who lives with her newsdealer father and mother in Chelsea, is romantically involved with a Scotland Yard detective. The rapid-fire “police procedural” (as we might call it now) that opens the film shows the boyfriend, Frank Webbor (John Longden) in action with a partner, following a lead radioed to them in their police truck (it looks like a gypsy caravan-lorry) to arrest a suspect in a crowded East End complex. A still often reproduced for this film is from the shot of Frank and his partner’s hard faces split by the Venetian-blind shadow of the suspect’s bedroom window.

Echoing this, but the image divided up vertically this time instead of horizontally, the suspect spies the two detectives’s faces split-mirrored in the dangling crystals of a lamp on the wall as he lies in bed hiding behind a newspaper. There’s a piece of suspenseful physical business of the suspect slowly trying to creep his hand toward a pistol on his bedside table, with the detectives leaping just in time to stop him. They arrest him and drag him through the crowded courtyard below to the police lorry, and he’s elaborately booked at Scotland Yard and put into a cell. When Frank gets off work after all this, he has a date with Alice at a huge restaurant so crowded they have to literally fight to get seats at a private table. (This is another example of Hitchcock’s penchant for and skill at wrangling scenes teeming with people.) Frank plans on a movie, but it doesn’t go well. It turns out Alice is meeting another man she’s just met — a pretentious artist (Cyril Ritchard) — he wears gloves and carries a cane. When Alice, who’s being moody and annoying, wavers about the movie and Frank gets fed up and leaves, the artist, who’s been waiting at another table, immediately moves in and takes Frank’s seat. Later, he insists that Alice climb up the multiple storeys to his high-ceilinged studio, which has turned out to be just around the corner from the news dealers’ shop where Alice lives. They do go up to the studio, though not before the artist has learned from the manageress (her hair in atmospheric curlers) that a strange man has come looking for him. (This man turns out to be lurking outside; he will become the blackmailer.) Alice and the artist play at painting a figure on a blank canvas: Alice crudely brushes in a face, and the artist more deftly outlines a girl’s body below; Alice writes “Alice,” signing it. Nearby there is an elaborate painting by the artist of a jester which later Alice will rip a piece from.

There’s also a ballet costume. The artist prevails on Alice to try it on behind a screen. She becomes giddy — they’ve had some drinks; dances around; flirts with the idea of modeling for the artist. But when he forces himself upon her, it turns into a struggle, she grabs a long knife, and. . . It all happens behind the screen (a foreshadowing of Janet Leigh’s demise in Psycho). Terrified, Alice creeps out. She has been forced to stab the pretentious, creepy rapist-artist but all she feels is guilt and fear. The next morning, it turns out that not only Frank, who’s been put on the case (the murder has been discovered with blistering speed), but Tracy (Donald Calthrup), the suspicious man, an ex-con, it turns out, who was lurking around trying to meet the artist, are both aware that Alice is responsible for the stabbing. Tracy comes calling when Frank is already there at the news shop and home of Mr and Mrs White, Alice’s thick-spectacled dad (Charles Paton) and plump blank mum (Sara Allgood), examples of the kind of homey, cozy Hitchcockisn couple we also saw in The Lodger and The Pleasure Garden. Frank has found Alice’s glove at the scene of the stabbing and vowed to conceal it. Tracy now takes over and plays god, preening himself on having control because he can blackmail Frank and Alice — a power symbolized by the stage business of his demanding that Mr White give him the best cigar he has in the shop and making Frank pay for it, then going into the house and demanding he be served breakfast, which he lingers over with tiresome self-satisfaction. Tracy’s reign is short-lived, however, when a call from Scotland Yard reveals that, having been ID-ed by the manageress from a photo file (elaborately shown on screen) he’s a prime suspect in the stabbing and, moreover, known to be an ex-con. As the police lorrie comes, Tracy flees through a window, and the elaborate chase follows, through the British Museum and up onto its high dome. This sequence is all the more dramatic for being depicted in long shots that dramatize the grandeur of the Egyptian Wing, the BM Library’s Victorian circular shelves and stairways, and the dome.

All this is cross-cut, in a foreshadowing of many suspenseful Hitchcock thriller sequences to come, with Alice’s change of heart: she is still guilt-ridden, and while Frank is tied up in the chase after Tracy that he knows will free Alice of suspicion, Alice herself has decided to turn herself in. Naturally, events are neatly timed to dovetail the downfall of Tracy with Frank’s reconnection with Alice at Scotland Yard, where her effort to talk to the commissioner is forestalled because more important things are going on: the big chase. The outcome is to provide a twist on a favorite Hitchcock theme. An “innocent” person is trapped in a crime. Alice is a “wrong man” (or in this case “wrong woman”) who isn’t entirely “wrong”: she did kill the artist. But after all, she did so in self-defense. We aren’t supposed to mind that Tracy is sacrificed to save her. This ordeal is sure to have increased Alice’s appreciation of Frank considerably, since he has protected her from any suspicion, and she probably won’t pick many rows with him from here on.

There may be some loose ends and questionable moments in Blackmail, but they tend to be swept away by the sheer fluency and verve of Hitchcock’s dramatic and entertaining cinematic storytelling. For Hitchcock fans and students, this is another of the nine silents that, along with The Lodger and The Ring, is clearly essential viewing, and it’s a highly accomplished, full-fledged thriller, Hitchcock being Hitchcock to the hilt.

The first cameo of the director shows him on a Tube train right next to Alice and Frank, squirming at the too-close presence of an annoying and (we would say) “hyperactive” child.

In the second he “takes the film out” by appearing seen from behind in the final shot, carrying down a corridor of Scotland Yard the painting of the jester Alice tore after the stabbing — as if, perhaps, to remove the most visible remaining sign, apart from the body, of her presence at the artist’s studio.

The Hitchcock 9 restorations by the British Film Institute were scheduled to coincide with the London Olympics, and this film was shown al fresco outside the British Museum, especially appropriate since the movie’s climactic set piece takes place both inside and outside the historic building. The inaugural outdoor screening of the Blackmai restoration was accompanied by a new score by composer Neil Brand and performed by the Thames Sinfonia. (Unfortunately the BFI DVD from the SF Silent Film Festival has no musical accompaniment.) Hitchcock simultaneously made a silent and sound version of this film, the sound version released later. 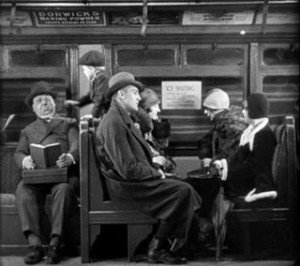 Reviewed as part of the US premiere of The Hitchcock 9 BFI-restored silent films by the San Francisco Silent Film Festival, shown at the Castro Theatre June 14-16, 2013.

Interview with Beyond the Woods’ John Ryan Howard