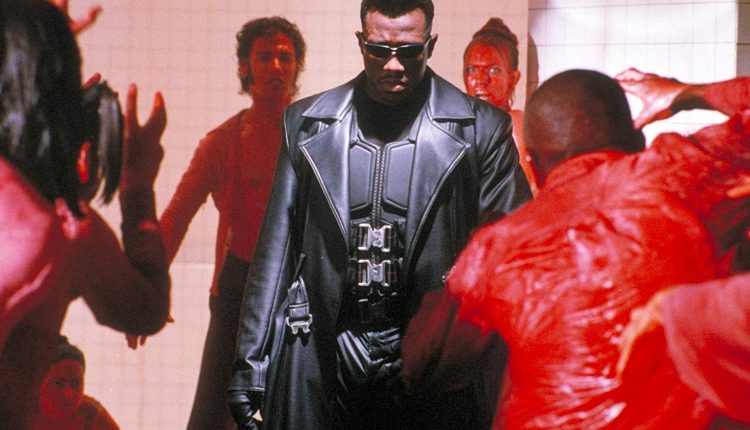 Blade is a film, that’s for sure. Is it a good film? Well, it depends.

As a lover of all things weird and horror-aligned, it’s a wonder that I hadn’t watched Blade until very recently, but, for better or worse, I’m absolutely delighted I did.

These days, we are inundated with vampire media (which, in my humble goth opinion, is a fantastic thing), but back in the late ’90s, this wasn’t the case. Blade was something new, the first foray of a Marvel Comics character into a cinematic world, and the result is something perhaps a little wonky but also mindbogglingly entertaining.

It was the late ’90s so some of the special effects aren’t all that great, but they certainly aren’t bad. Ridiculous, for sure, but not bad.

Somehow, all of the actors in Blade kind of look like another more famous actor, which adds to the whole Twilight Zone vibe (vampire pun intended), but most of them seem to know the campy horror theatre they’re starring in, and they ham it up appropriately.

Does this film make much sense? No. Is the script something we would call “good”? Maybe not. Does it have ridiculously cool production design and kickass action sequences? Absolutely. When Wesley Snipes is wearing a leather tank top and wielding a katana whilst vampires explode in the background, it’s hard not to be having fun.

Overall, Blade is a little slow getting started, but by the end, I was having the time of my life – bad CGI and all. If you’re looking for an entertaining, blood-soaked oddball of a film, I’d suggest watching this one.

And, let’s not forget that Marvel recently announced that Blade will be rebooted, with Mahershala Ali as the star, and with 2020 CGI who knows what this film could achieve.