A remake of a beloved sci-fi classic, featuring a variety of impressive practical effects that starts, almost, with a flaming object landing on Earth. No, I’m not on about The Thing by John Carpenter. This may not be up to the level of that modern masterpiece, but The Blob, directed by Chuck Russell, is yet another fantastic sci-fi horror remake from a decade that also gave us the aforementioned Carpenter movie and Cronenberg’s take on The Fly. 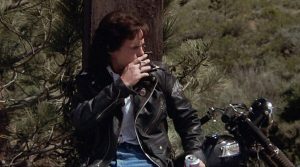 The story is, in essence, very much the same as it was in the original. A blob lands in a small town and starts blobulating all over people, swallowing them up into its growing blobbiness and being a blobby nuisance. The potential hero of the hour is a bit of a bad boy (Kevin Dillon taking the lead role), there’s a scene in which the blob goes blob-tastic in a cinema and the majority of the movie shows everyone getting increasingly desperate to figure out a way to stop the thing from taking over the town, the country and, eventually, the entire planet. 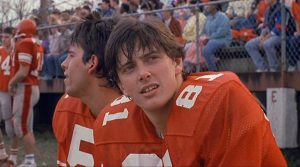 Director Russell, who co-wrote the screenplay with Frank Darabont (bringing the concept nicely up to date while also including numerous nods to the original), does well here. In fact, I’m always surprised that Russell didn’t carve out a better directorial career for himself after such a great start. The first movie to put him in the hot seat was A Nightmare On Elm Street 3: Dream Warriors, he followed that film with this one and then made quite an impact in the early ’90s when he helped Jim Carrey reach the A-list with The Mask. But let’s get back to this particular film.

Nicely managing to avoid the whole thing seeming ridiculous, Russell and Darabont were lucky enough to work with some top notch special effects people on this movie. There are moments, especially during the finale, in which the fakery is glaringly obvious, but there are many moments that hold up as prime examples of how good practical effects can be. 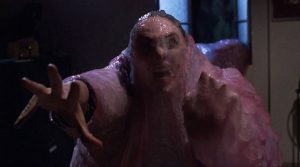 The cast are good, but not great. Kevin Dillon has fun in the lead role, and Shawnee Smith certainly holds her own alongside him and deserves to share top billing. Jeffrey DeMunn and Candy Clark are both very likeable, Joe Seneca and Del Close are both entertainingly Unlikeable and Donovan Leitch does okay with his small role. 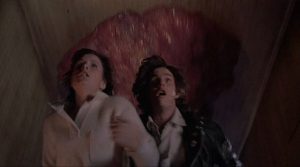 As well as the sheer entertainment factor, The Blob is also an interesting movie to view just to see a fantastic melting point of the right factors in place at the right time. The original movie is much loved, but it was a great choice to update for a new generation, Russell quickly managed to prove himself as a director who could use special effects sequences effectively without unbalancing entire movies, Darabont was obviously passionate about the project (and there are lots of elements here that will feel familiar to fans of The Mist) and the cast were all . . . . . . . . . . well . . . . . . . they were capable and available. 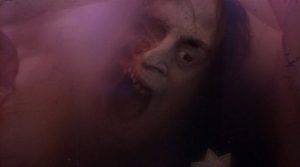 There’s no theme song this time around, sadly, but, in all other respects, this is a remake that manages to just edge ahead of the original. It’s a wobbly, blobby treat.