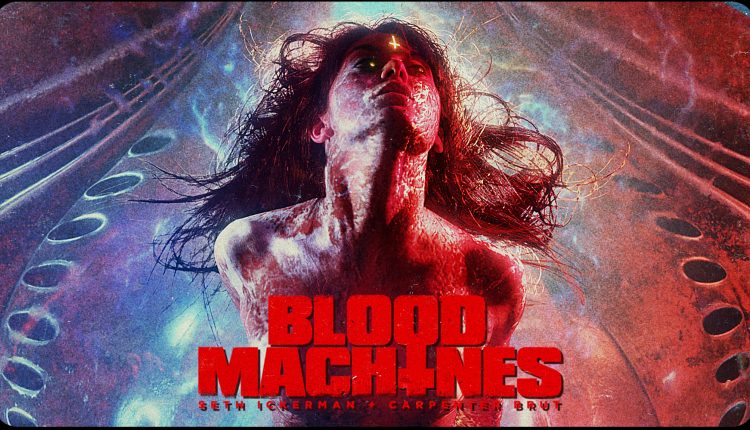 The new sci-fi / fantasy Blood Machines, plays out like an extended psychedelic music video, shot in a series of acid colours which perfectly match its trippy ambience.

If you sense the film – which unfolds in three interconnected chapters – should be accompanying some electronic rock album, then you may not be so far off the mark. Directed and written by Seth Ickerman – a pseudonym for French filmmakers Raphaël Hernandez and Savitri Joly-Gonfard – the film is an expansion of the music video Turbo Killer (2016), which they shot in collaboration with cult electro / synthesizer star Carpenter Brut. Finding inspiration in everything from Dario Argento to metal music with more than a smattering of the occult, the music that Brut has created to underscore Seth Ickerman’s mind-bending screen vision is quite literally out-of-this-world.

Blood Machines follows two detectives (Anders Heinrichsen and Christian Erickson) as they hunt a supernatural being who leads them on the ultimate trip to the outer realms of space and imagination. And really its as simple as that. Truth be told the rater flimsy story-thread is clearly there simply to bring together Brut’s unearthly music with a series of images reminiscent of the hallucinatory qualities of Altered Sates (1980) crossed with Blade Runner (1982) and The Fifth Element (1997), for a 21st century audience. And, though the film is quite clearly CGI saturated, the human characters interact so seamlessly with their imaginary environments the viewer soon forgets that none of what they’re seeing could possibly exist, getting lost in the cosmic nightmare unfolding before their eyes.

The official selection at numerous international fantasy film festivals, Blood Machines was co-produced by SHUDDER, the subscription streaming platform, and shows exclusively through their service from May 21st, 2020.