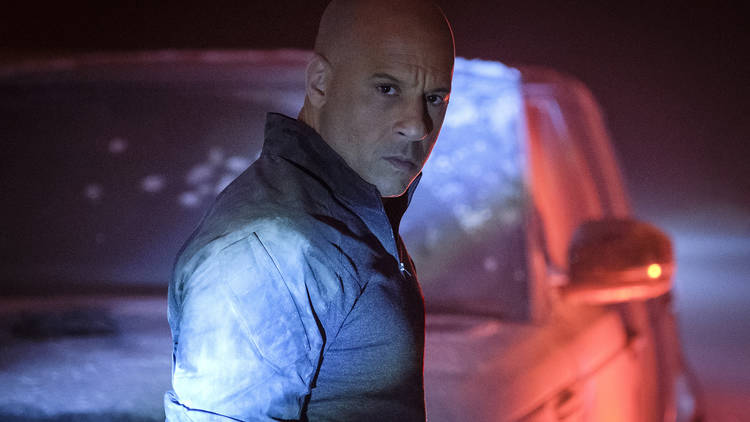 NEWSFLASH: Vin Diesel is in an action thriller that does not require him to be fast or furious with the gear shift while burning rubber on the cluttered streets. However, Diesel is powered as a modified machine-like assassin in the relentlessly convoluted comic book thriller Bloodshot. One could take the baseless Bloodshot as a poor man’s knockoff as The Terminator. Others can simply dismiss this frenzied fantasy of a sci-fi mess as another dumbed-down, over-extended action-oriented Diesel vehicle in search of its makeshift swagger. Nevertheless, all the copycat flourishes and cliched foundations of the bio-engineered banality featured in Diesel’s vanity film project will make one’s weary eyes reflect this indulgent action thriller’s movie title.

Bloodshot is based upon the comic book character from the Valiant Comics. Diesel plays Ray Garrison, an ex-Marine whose misfortune of returning home results in his untimely murder. Luckily, the soldier gets a new lease on life courtesy of being built with nanotechnology. Think of Garrison as the big screen’s version of The Six Million Dollar Man crossed with the revenge factor of Clint Eastwood’s spaghetti western Hang ‘Em High. All patched up and ready for slaughtering Garrison is out to eradicate the undesirables that left him and his beloved wife for death. Indeed, Ray Garrison has a major score to settle.

Naturally, Garrison’s coolness is highlighted by his code name of Bloodshot. The team of scientists led by Dr. Emil Harting (Guy Pearce, “Disturbing the Peace”, “Swinging Safari”) use the new and improved Ray Garrison/Bloodshot to their advantage as a half human/half mechanical assassin out to target whomever the RST corporation wants eliminated. After all, Garrison is one of their top multi-billion dollar projects and this research facility definitely wants to get some viable mileage out of this former wounded warrior.

As super-soldier Garrison is programmed and manipulated by the sinister Harting and his administrative minions, the thirst for killing starts to take its toll on the muscular Balding Wonder. Thankfully, Garrison is soon teamed up with another similar specimen in the form of curvaceous KT (Eiza Gonzalez), a bio-soldier babe whose memory lapses and overall plight is something that she can relate to the disillusioned Ray.

As Garrison starts to recollect his memories, thoughts, imagery and feelings leading up to his demise, the resentment is too overwhelming to bear at this point. Harting and his corruptive crew may have been responsible for Garrison’s resurrection but they will also be liable for his fury as well. After all, Ray Garrison has the unique capability to become the one-man wrecking ball that destroys all that has caused him his disdain and discomfort. Alas, Ray Garrison is looking to right the wrong that has befallen on him and his woman. Now someone has to pay the price for his personalized wrath of destruction.

Payback is the name of the game in Bloodshot and the familiar theme of finding peace within even if it is making war with a cynical world should be a reliable formula for this follow-the-dots actioner. Sadly, Bloodshot does not have an original bone of distinction in its boisterous body. Basically, it is a tired assembly of the same old action-packed tropes leaning on flashy fight scenes and exaggerated explosions. Diesel’s monosyllabic delivery of lines becomes old very fast. Screenwriters Jeff Wadlow, Bob Layton, and Eric Heisserer concoct a spotty script that is woefully generic…something profoundly inexcusable in a cinematic age where the comic book movie genre is challenging, opulent, and engaging. The various scenes feel awkwardly sprung together without any particular rhyme or reason. The whole affair seems dismal and draggy. Even the opportunity to expound upon the universal concept of man versus machine in this sci-fi slog is botched to no end.

Director David S. F. Wilson is aimlessly running on the stale fumes of previous action movies while sacrificing what non-existent identity Bloodshot can claim if any. Diesel merely makes a pitstop in this toothless comic book caper before returning to his long-running profitable film franchise of another The Fast and the Furious (or “F9”) flick. Supporting players Gonzalez and Lamorne Morris (in the comic relief role of a tech coder) add some glimmer of color to this otherwise drab action thriller.