Jean-Claude Van Damme was no overnight success, but audiences in the late ’80s and early ’90s may not have realised that. He’d gone from small parts in lesser movies (a debut in a skin flick, an extra in a scene from Breakin’, a villain – his biggest role – in the fun No Retreat, No Surrender) to ruling the action movie roost, mainly thanks to the one-two knockout of Bloodsport and Kickboxer. 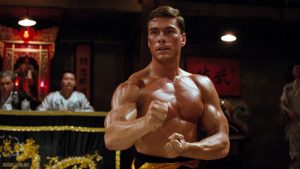 Bloodsport is all about a martial arts tournament, The Kumite, in which various contestants use their various disciplines to try and defeat everyone else. It’s as simple as that. Each round is one on one, the last man standing wins. Van Damme is a man named Frank Dux (pronounced “Dukes”) who has taken leave from the military to participate. He wants to honour his master, much to the annoyance of the military folks who don’t want him to get majorly damaged. This means that Frank has to fight his fights while also staying out of the hands of the military men out to cut short his time in the tournament. 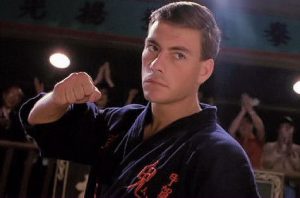 It’s hard to believe that it took three people – Sheldon Lettich, Christopher Cosby and Mel Friedman – to write this movie. It’s so simple, so by-the-numbers, that it doesn’t seem as if much effort was put into it at all. Of course, if it all seemed effortless then that would be quite a compliment, but that’s not quite what I mean. It seems as if a number of points had to be included in the story, but the structure is clumsy and lazy (with the flashbacks during the first third of the movie almost being enough to turn some viewers off, in my opinion). 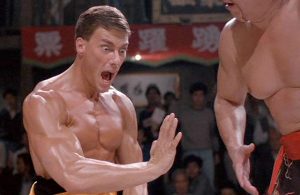 Director Newt Arnold doesn’t have to break a sweat either, but he’s covered by the fact that he has Van Damme in the starring role. The man may have had his ups and downs over the years, but when he was near the top of the action star ladder he was damn good value. He’s given great support from Donald Gibb, playing a fellow fighter who becomes a friend, and the mighty Bolo Yeung is impressively villainous. Leah Ayres is the female reporter trying to get the scoop on the tournament, and Forest Whitaker and Norman Burton are the two army men assigned to retrieve our hero.

There’s a cheesy song or two on the soundtrack, one rousing track that’s actually quite decent, and at least three separate montage sequences (a training montage, a fighting montage and a “struggling with emotions externalised as clips from what viewers have just been watching” montage). But hey, despite these things, this remains a cracking action movie from the eighties, and one of the best star vehicles for the charismatic Van Damme.