The makers of Blue Iguana should probably count their lucky stars they had Sam Rockwell attached to their film.

Somewhere between 2016, when this film was shot, and earlier this year, Rockwell won the academy award for best supporting actor for Three Billboards Outside Ebbing Missouri. The weight of such an accolade has something of a butterfly effect, then. It gives Blue Iguana a better chance at the box office, having a bona fide Oscar winner front and centre of their marketing campaign, and yet, does no favours to Rockwell fans flocking to see what is essentially his next film, who will no doubt be bitterly disappointed and most probably baffled that he would follow up such intelligent, issue driven cinema with such a ho-hum hodgepodge of crime cliché bibble. 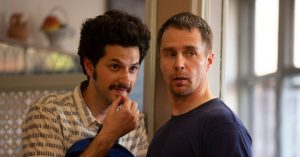 Blue Iguana belongs to a genre of films that hit their peak in the mid 90s, courtesy of an attempt by pretty much every indie-based, and primarily male, film maker to make their own version of a Quentin Tarantino film. That is, crime based, dialogue driven character drama, with plenty of gun play and swearing.

Writer/director Hadi Hajaig’s film has all of that, but misses the fine sense of irony that laced the best of Tarantino, or indeed the Coen Brothers’ early works.

Story wise, it deals with two ex cons, Eddie (Rockwell) and Paul (Ben Schwartz), who botch a seemingly easy job of snatching a back pack, the aftermath of this cock up forcing them into situations both too convoluted and too tedious to really go into in much detail. Its a fish out of water tale, starting in New York, where Eddie and Paul are working out their parole in a greasy diner, before heading to London, courtesy of Phoebe Fox’s English Lawyer Katherine, who has her own reasons for wanting things done right.

Of course, things go arse over teacup pretty fast, and the film quickly loses grip on both story and character, falling back on cliché, multiple references to other (better) crime films, and a tendency to over rely on performances that verge on caricature.

But not in a good way, like Mike Leigh.

There is nothing exceptional here, nothing that stands out. Like a Big Mac, it’s vaguely enjoyable, but instantly forgettable. There are a clutch of good performances, particularly Phoebe Fox, who balances Katherine just right, her character really the only person with any real stakes at risk. 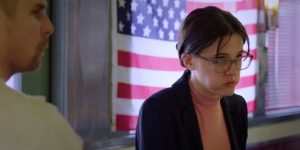 Elsewhere, the supporting characters are fairly forgettable, lost in a verbal sandstorm of cockney accents, obscenities and plot exposition.

Even Rockwell, who also takes a producer credit here, appears to be on auto pilot here, jettisoning his usual character tics and quirks, in favour of the stable leading man shtick that, as fine and solid as he is, just doesn’t fit him as well as the misfits.

That said, much like Christopher Walken, another actor who is no stranger to slumming it in work that’s beneath his talents, he still manages to find space for a little dance, and the film’s only decent joke, his attempts at a Cock-a-ney accent that is one third Michael Caine and two thirds Dick Van Dyke.

Technically, the film looks great, Ian Howes’ cinematography slick and colourful, but the editing relies on so much slow motion that you begin to wonder if the film makers were trying to pad out their running time, in order to avoid being seen as a short rather than a feature. 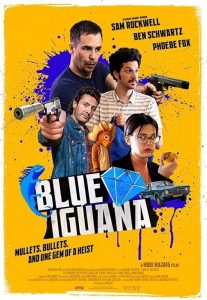 Hajaig’s script is actually fairly tight, plot wise, which makes it very disappointing that its pace turns out to be so pedestrian, with no particularly memorable dialogue to help seal up the cracks in the story. Trimming a sub plot or two might have reined things in a little better.

Ironically, given its 90s inspirations, had Hajaig dug a little deeper, and stolen from, say Blake Edwards this could have been some breezy fun. The tendency to ramp up the violence, this desperate need to be edgy, sits badly with the tone the film sets out from the beginning.

Blue Iguana is in cinemas now.