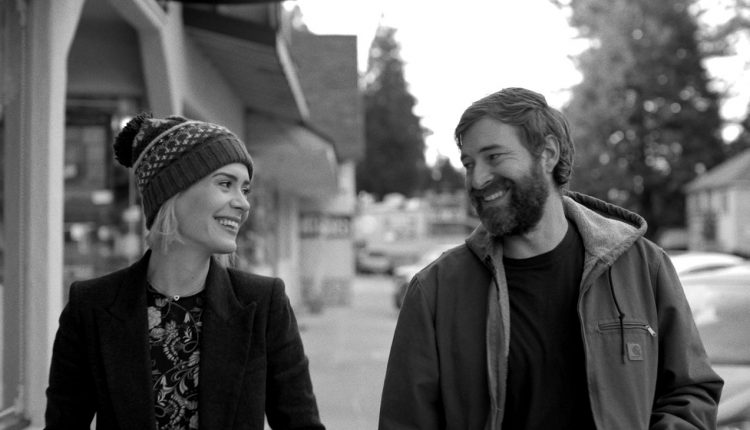 If the past is a foreign country, no one seems to believe it. Particularly when it comes to our own history, we often look back with a carefully censored gaze. Blue Jay throws two former high school sweethearts into this confusing nexus causing them to evaluate current inadequacies against a time that probably wasn’t real.

The ever prolific Mark Duplass, writer and co-star here, plays Jim, a down on his luck dry wall specialist returning home to clear out his parents’ old house. Shopping for a few essentials, he bumps into Amanda (Sarah Paulson), also on a brief visit to see her pregnant sister. Now married and with a fulfilling career, at least on paper, she appears to be doing the better of the two. As their time together unfolds, both will reveal substantial unhappiness.

First time director Alex Lehmann shoots the entire thing in unadorned black and white, giving it a feel somewhere between Hollywood classic and direct cinema. There’s a timeless sheen cast by the lack of colour, one that smooths over the rougher edges of their poky childhood town. The camera becomes a true proxy for Jim and Amanda, displaying the slightly unreal picture they themselves are engrossed in.

After reuniting, time passes and the two ex-lovers can’t seem to separate themselves. They go for coffee and then sit outside. Unwilling to end their reconnection, they move on to Jim’s house and his childhood room full of physical reminders of what they used to be. Sexual tension hangs over the encounter, never fully blowing up. Whether role-playing a romantic dinner or dancing to ‘90s tunes, their faces come close, eyes locking without surrendering to the obvious temptation.

It wouldn’t feel right were Blue Jay to throw them straight onto each other. Duplass has written far more than a horny reunion. What it lacks in individual moments that live on beyond the film, it makes up for through a deep dive into the unreliable past. Prancing around now it’s hard to remember why they broke up. The chemistry certainly hasn’t died but is it actually real? The line between rose-tinted nostalgia and present day feeling is not a clear one. Do Jim and Amanda still like each other or do they actually pine for the teenagers they once were?

As befits an understated film, Duplass and Paulson play the roles carefully. He’s more awkward, stuck in pauses and odd gestures, she’s initially withdrawn. Emotional explosions are not entirely absent, they’re just kept to the minimum allowing Jim and Amanda to grow back into each other’s company. More emotion is conveyed when Duplass strokes his beard or Paulson darts her eyes than any words could manage.

Blue Jay is a quiet, subtle work, short of standout moments but strong as a whole. As foreign a country as the past may be, it’s alluring. Whether succumbing to it helps remains unclear.