Blue Ruin’s title made me think of Alexandre Moors’s Blue Caprice, another indie film about killers who lived out of an old car. (They’re even both Pontiacs.) As I’m not the first to say (it came out in Directors’ Fortnight at Cannes last year), Blue Ruin is very deftly made by its writer-director-cinematographer, cast, and crew — but still a pretty nasty revenge movie whose characters are as shallow as is usual in the genre.

The starting point is a character, Dwight (Macon Blair), but he barely talks; he’s just a downbeat lifestyle, a thirty-something man living homeless, has been for seven years, it turns out. He’s bearded and long-haired, living out of the beat-up rusted car of the title, a sort of beach bum on the edge of a Delaware seaside town with a boardwalk. He collects bottle refunds for cash and Dumster-dives. As David Denby noted in The New Yorker, Saulnier has a cameraman’s keen eye for light, and makes Dwight reading in his car at night, using found amusement tickets as a book mark, a cosy, inviting thing to see, so we feel close to the man. But this is not the same as caring for him or understanding him. Here’s an odd note: he sneaks into people’s houses when they’re away to shower and clean up: when some come back unexpectedly he flees wrapped in a towel. He is revisiting a middle class lifestyle from which he comes.

Things speed up, only later to slow down. At first we don’t know the facts clearly, but Dwight learns a man has been released from prison after some twenty years, who did his family some dire harm. He goes to the prison when the man’s met by his family, follows them to a road house, and kills the man with a small knife in the men’s room. It’s a messy job and Dwight emerges with his shabby T-shirt and trousers drenched with blood. This is a hint of things to come. In fact the film is very consistent. Dwight is a klutz. He can barely do anything right. The Coen brothers’ debut Blood Simple is sometimes mentioned in comparison. But this is like having the last agonising twenty minutes of Blood Simple extended through its entire run-time. That’s the originality of this film and its limitation. 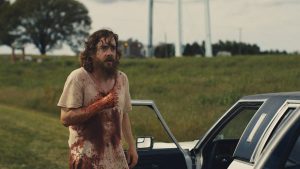 There’s no doubt of the accomplishment. This is the edgiest minimum budget indie crime film in a long time. Saulnier, an experienced cameraman, makes fine use of wide screen with shallow focus, keeping close to Macon Blair (a longtime collaborator of Saulnier’s) but letting details remain unseen. The suspense isn’t so much what dangers will arise, though there are those — Dwight has attacked a family of mean killers — as how he’ll mess up next.

Dwight has prepared for his killing, that too clumsily. He sends his sister a warning postcard, but too late for her to get it in time. Perhaps he knows the released prisoner’s family will come looking for him. He buys a pistol, but he wrecks it and throws it away. When he realises he’s stirred up a wasp’s nest, he does one of his house sneak-ins and clean-ups and removes the long hair and beard, donning trousers and a dress shirt so he looks like any white collar stiff. His face now appears hangdog and meek. He goes to his sister, Sam (Amy Hargreaves) in his Virginia hometown, to warn her she and her young kids are now in danger (she didn’t get the postcard). This permits some needed exposition. They sit in a cafe and talk, a thing he says he’s unused to. It turns out the prisoner was convicted of killing their parents. Sam is glad Dwight killed the man, but also angry. He’s not moral, just weak, she tells him. While she flees, Dwight waits in her house. This is where Saulnier & Co. are riding high, with tense waiting, then outcomes that are as gruesome as they are comical, particularly the business with an arrow shot by one of the hillbilly family nasties (their name is Cleland) into Dwight’s leg. When he gets through that Dwight does one smart thing. He tracks down Ben (the excellent Devin Ratray of the Home Alone movies, recently Nebraska), an Iraq war vet and best friend from high school, and gets a weapon and gun lesson. And this leads to the most exciting, gruesome, and comical incident of all.

It’s only later when there’s more waiting, too much, and Dwight seems not only inept but completely unsure about what he is doing, that the fun and a lot of the tension dissipate. And this is where you begin to realise you don’t care much about Dwight one way or another. The physical business, minute to minute, has been fresh and original and compelling. This has been like what would happen if real people did the stuff in movies, noir without the bars and banter and babes. There’s a sense of unusual “realism,” the shock of the terrible clashing with the ordinary. Could this be me? It’s also remarkable that proceedings can be kept gripping with such minimal means, a quiet sound design, minimal synthesizer hum, no fancy special effects or in-your-face shocks. But in the end, when things slow down, there’s nowhere to go, and the essential shallowness of the enterprise reveals itself. If you want to say Saulnier “elevates the horror genre,” you can. But he also denudes noir of its style and flavour, and makes a revenge flick seem sophisticated when it’s just as crude as ever. However, after this success, we can expect Saulnier to start getting much bigger budgets and he may make some interesting movies.

Blue Ruin debuted at Cannes Directors’ Fortnight 17 May 2013, where it won the FIPRESCI Prize. Many other festivals and awards. It was released in the UK 2nd May 2014.