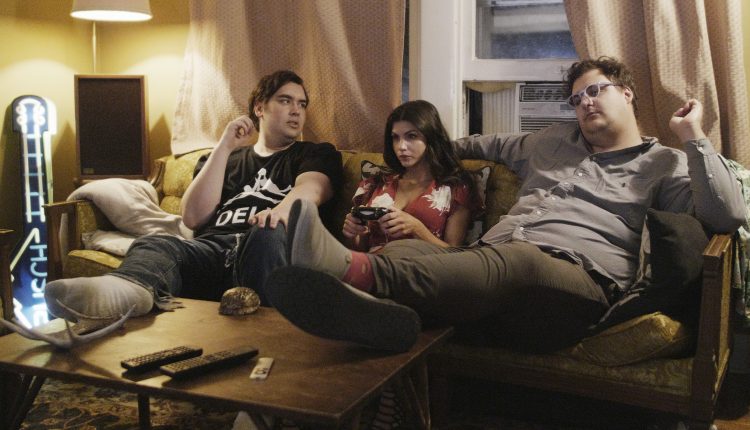 Body Swap might possibly be one of the worst films ever made. Made like an exemplar student film frequently shown at film schools, not an exemplar as in it’s good, but examples that are terrible but somehow are still shown. Timothy Morton’s film is completely unengaging and takes a familiar cinematic trope does absolutely nothing with it.

It’s a horrendous mess of a film and a complete chore to watch. Jimmy Kustus, best known for an uncredited role in Logan Lucky, wrote, produced and sadly starred in it as one of the titular characters. Kustus is lifeless as Casey and likewise, his screenplay is too. Kustus’ screenplay is not even first-draft worthy. It’s an unfunny comedy, riddled with cliches and not once will one laugh.

CJ (Ella Jordan) is a business woman and Casey (Jimmy Kustus) is an unemployed-couch-dweller. Upon visiting the Versa Corporation for an interview a strange occurrence happens. The two magically switch places with each other, due to a toaster incident. They are forced to switch places and live each other’s life.

The film begins with a supposedly real interview as the couple answer questions following their freak body swap. An obvious attempt to evoke the interviews seen in When Harry Met Sally. However, clearly this is no Rob Reiner class of film, those interviews come across as terribly shot YouTube interviews. A mishmash of YouTube style editing and camerawork mixed with the worst student film you’ve ever seen is what you get with Body Swap.

First-timer Evan Sennett’s cinematography is consistently flat, bringing no dimension or additional life to any moment. Furthermore, the casting is amateur at best, it feels like a Hallmark film produced on a student budget. Infested with archetypal dialogue, non-inspired filmmaking choices and daft performance delivery, it feels as if a two year could’ve made something far better.

Body Swap may just be the worst film of the century, it has categorically nothing going for it and it’s as bland as it gets.

Body Swap is out in US theaters and on Digital on Friday 2nd October.