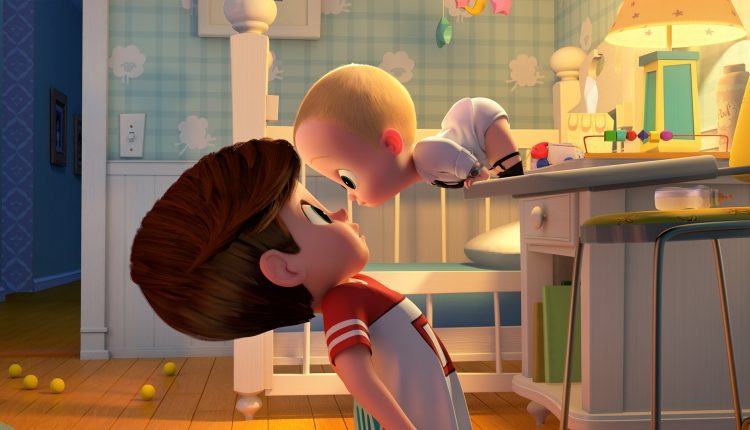 Glengarry Glen Ross’ Blake, 30 Rock’s Jack Donaghy, SNL’s President Trump… Alec Baldwin has played a mightily impressive collection of petulant, business-obsessed braggarts with more balls than brains during his career. The Boss Baby presents a surprising opportunity to add to his rather niche oeuvre, voicing a tyrannical, suit-wearing baby with tiny hands who causes chaos with his unexpected arrival in a white house. If only the movie itself could match Baldwin’s bravura energy and impeccable comedic timing. Instead, The Boss Baby is a frantic, ill-conceived and only occasionally funny family comedy that preaches the importance of love yet lacks any semblance of a heart.

The story is told through the completely unreliable point of view of imaginative seven-year-old Tim (Miles Bakshi), an only child who spends his days having fun with his parents (Jimmy Kimmel and Lisa Kudrow) by conjuring wild fantasies in his mind. His blissful childhood crashes to a halt when his parents proudly announce the arrival – by taxi, no less – of Tim’s little brother, the Boss Baby (Baldwin). While his family gush over their new arrival, Tim endeavours to prove to them that the briefcase-carrying tot is not a real baby but a corporate stooge on a secret mission to find out why puppies are stealing all the love in the world and threatening to drive babies out of business.

There’s an obvious attempt to replicate Toy Story’s mismatched central pairing here, especially when Tim and the Boss Baby are forced to buddy up to save their parents, but this movie lacks the warmth and emotional depth of the Pixar classic. Crucially, director Tom McGrath completely forgets to make his lead characters likeable. We’re supposed to sympathise with Tim because he feels forgotten by his parents, yet by immediately taking against the new arrival before he’s provoked he just comes across as a spoiled brat. The Boss Baby is similarly irredeemable as he attempts to drive a wedge between Tim and his parents even though such a cruel tactic has absolutely no relation to his primary assignment. Even the common goal that ultimately brings them together feels needlessly callous as they team up to send the Boss Baby back to Baby Corp headquarters – a move that would rob Tim’s parents of a child they clearly adore.

It doesn’t help that the movie’s bonkers premise doesn’t hold together either. The Boss Baby is on a mission for Baby Corp, the heavenly factory that squirts out babies to expectant parents, to gather intel on the Forever Puppy, an everlasting pooch designed to wipe out the competition for parental love. We’re initially led to believe this is another of Tim’s flights of fancy, re-imagining the arrival of his baby brother as a hostile corporate takeover in much the same way his bath time becomes a deep sea rescue mission or a bike ride becomes a trip in an out-of-control spacecraft. The idea becomes increasingly convoluted as the screenwriter Michael McCullers struggles to explain how every plot development could be taking place in Tim’s mind and he eventually gives up on the device entirely. All of which forces us to believe there really is a secret baby factory in the sky and that it’s closest competitor is plotting to use puppies to take over the world. Even for a movie aimed at children, that’s pushing the boundaries of credibility a little too far.

It’s not all bad, of course. There are some clever gags aimed at middle-management culture (even if they’re likely to fly over the heads of younger viewers), Tim’s daydreams are inventively animated and there are a number of exciting set-pieces, including a thrillingly silly car chase soundtracked to the theme of ‘70s cop show S.W.A.T. The problem is that McGrath never manages to harness The Boss Baby’s strongest aspects into a winning product. Instead, he takes a scattershot approach, throwing every possible idea at the screen and hoping enough sticks to make an entertaining movie. Unsurprisingly, such an ill-advised tactic fails to pay dividends.