Boyhood proves one of director Richard Linklater’s most ambitious projects yet. Not only must it had taken a lot of discipline to film a story in fragments over a twelve year period, but the real test is to keep an audience engrossed for the best part of three hours, in what is essentially a linear narrative.

Part of the enduring appeal of this movie is how the story and characters grow organically on screen. Much of Linklater’s work would happen off camera when working with the actors, while fine tuning the details of the characters lives. Part of the beauty of this film is just how straight forward the structure is, as well as the unfussy visual style, and direction. The upshot of this is that Linklater is able to situate the viewer into the world of the film, without there being an uneasy sense of manipulation, or the film feeling gimmicky. This technique allows the characters and their world to be grounded in reality, and subsequently heightens the dramatic moments, thus making these moments more shocking and credible.

The young cast is very well handled, and responds with naturalistic performances, with the adult cast providing steady support too. Ethan Hawke gives a good impression of a goofy dad, who is caught somewhere between being a hippy, and a straight laced family man. It was refreshing to see a normally, very serious actor send himself up.

Patricia Arquette also gives a nicely subtle and toned down performance. She is convincing as a single Mum who is conflicted between sticking to the norm in order to protect her kids, but also desperate to advance herself in belief that this could provide a better life style for the whole family. 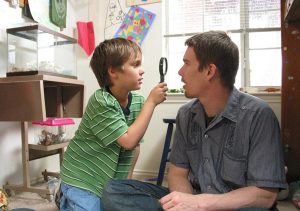 Much like Ghost World (2001), Boyhood takes the novel approach of investing its younger characters with independence and intelligence far beyond their years. So unlike many films of its genre, this does not feel like a film which is talking down to the younger audience or treating its characters as stereotypes, but instead gives them realistic emotions, and relatable problems. Crucially the characters, both adult and children are equally likeable, and flawed.

Not everything in Boyhood quite gels. For example, the tendency for Arquette’s character to fall into relationships with unsuitable men with drinking problems felt a little cliché and like it was a clunky device trying to serve the greater narrative. Also, the Mason character during the final section of film treads a fine line between becoming a stereotypically mumbling teen, and a layered character that truly has complex issues with the modern world. The running debate between Mason and his girlfriend over the value of social networking sites, and technology as a whole does touch on some interesting modern themes. It is also a way to distance the grown up version of the character from his childhood, while at the same time distancing him a bit from the audience. This could be problematic depending on your prospective.

Give or take a few rough edges, Boyhood flows nicely, and is enjoyable, and charming, while still daring to go to dark and challenging places. The film presents its characters with difficult challenges, but never provides easy answers. This is consistent with life, and the experiences of growing up.