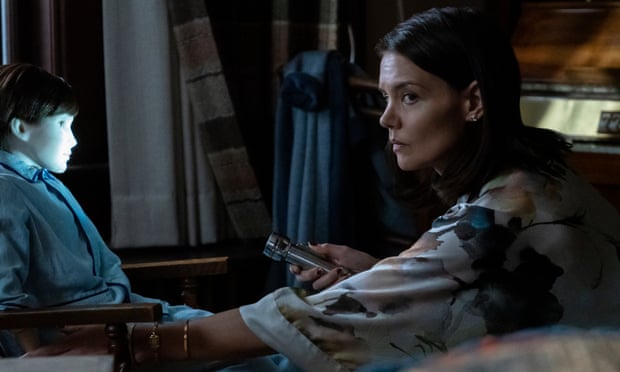 Clearly, naughty Brahms from 2016’s The Boy needed more of a supernatural spanking than he does a needless follow-up in a dull and creepy cornball sequel pitched a few years later. Thus, director William Brent Bell’s devious yet drab doll frightfest Brahms: The Boy II returns to the fearful forefront not offering anything substantive or creatively shocking to this stillborn horror ham sandwich. Random jump scares, sketchy tension and moodiness, atmospheric dreary surroundings, and edgy visuals dripping in gothic-style flourishes is not quite enough to propel Brahms: The Boy II as a compelling creeper that resonates with solid thrills.

Although it is refreshing to see Katie Holmes back on the movie radar in a leading role as a beleaguered mother detached of her senses, it is kind of puzzling as to how she would sign on the dotted line for this saggy and sullen sequel to The Boy that was not quite that memorable when it was originally released. Screenwriter Stacey Meaner penned the first blueprint to the original construction of the anemic The Boy and unfortunately there is not much macabre meatiness to the nonsensical numbing taking place in Brahms: The Boy II either. This whole sluggish session of slab-and-drab hysterics is essentially dismissive material even for low-rent horror enthusiasts. The brisk 86-minute run time for Brahms: The Boy II feels like a tedious eternity to endure given the belabored subpar chills that aimlessly wallow in manufactured weirdness and waste.

Londoner Liza (Holmes) and her mute son Jude (Christopher Convery) are in devastating shock after the trauma they have experienced in the aftermath of a home invasion. Head of household Sean (Owain Yeoman) feels that he needs to transport his wife and son out of harm’s way in London and move them to the quaint countryside for immediate peace of mind. Eventually, the fragile family settle in at a guesthouse within the remote vicinity of an abandoned mansion on the vast estate. Of course, the expectation of tranquility in this new isolated location is hopeful until the unthinkable happens–the introduction and discovery of the seemingly innocuous but dastardly doll named Brahms.

Specifically, Jude comes across Brahms on the wooded property as the devious doll was partially buried. Brahms, most likely better dressed than the human tyke that found him, is cleaned up by Liza and then Jude bonds with the terrorizing toy afterwards. Finally, Jude has something to feel good about despite his stigmatized silence of fear. Jude names the new pint-sized play pal “Brahms” and together the duo are never apart and connected in devotion to one another.

At first parents Liza and Sean are delighted that their son Jude seems to be emerging from his trapped shell and becoming more engaged courtesy of his inanimate sidekick serving as a therapeutic companion. However, they start to show some major concern as Brahm’s noticeable influence over Jude’s behavior becomes rather worrisome. Perhaps Jude is spending too much time with the unassuming plastic-faced pest that may have sinister designs on their offspring not to mention them? What if Brahms is capable of causing such creepy-minded chaos to the point of no return? Will the caustic effect of bad boy Brahms further damage the indelible psyche of Jude and send this troubled kid into a depressive slide that he and his parts will never recover from?

It is a shame that Brahms: The Boy II and its predecessor could not capitalize on the potential dimensions of youth-oriented angst or even the self-destruction of problematic family unit anxiety and disillusionment. Bell’s unimaginative, arbitrary direction and the woefully shoddy story about a misguided and menacing misfit of a toy-boy tormentor never seizes any opportunity for authentic psychological edginess or concrete nervousness other than achieving the clunky confines of jittery junk theatrics that are uninventive and uninvolving. There is no evidence of distinctive fright or even enjoyable trashy flash of shock that gives this tepid twitchy tale any source of wayward cynicism or sizzle.

The twists and turns are about as tiny and trivial as Brahms’ footsteps through mud patches. The tame toxicity of Brahms’ mental manipulation never fittingly registers because the lazy and bland narrative does not arise to the occasion in supplying the sordid sauce to this watered-down, doll- dilemma diatribe. Holmes’ Liza shows the paper-thin anguish with all the convincing motivation of the actress reading about the latest account of her love life in a Hollywood gossip rag. Furthermore, the momentum of the plodding exposition does a poor job at showing just how wounded the Holmes/Convery mother-son tandem really are at heart–particularly in the recent memory of their home invasion hallucinations. Plus, the restrained Brahms could have been more warped in his insidious intentions. Where was the unemployed Chucky when this hollow horror sideshow could have used him?

Sadly, there is just no way to make an applauded monstrous man out of Brahms: The Boy II unless one stunts the growth of this childhood wicked weasel by not crafting another baseless sequel.