by Kevin Matthews
in Film Review

It’s not hard to see just why The Breakfast Club struck a chord with teenagers who embraced it in the mid-1980s. It’s a perfect mix of teenage angst, comedy, some good tunes and a strong dislike of adults who can’t remember what it was like to be young and struggling to find yourself. It also remains the best movie featuring a bunch of people killing time during detention (despite strong competition from films that have been influenced by it, like . . . . . .  Detention). 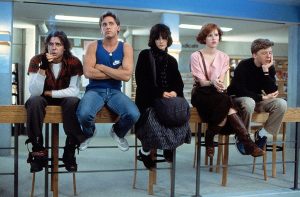 The five being detained are wrestler Andrew (Emilio Estevez), carefree rebel John Bender (Judd Nelson), spoilt rich girl Claire (Molly Ringwald), nerdy Brian (Anthony Michael Hall) and silent, and strange, Allison (Ally Sheedy). Paul Gleason plays the authority figure exasperated with the youth of today, and John Kapelos pops up for a few moments in which he reminds everyone that while they may just think of him as the caretaker who wanders by their lives, not making any major impact, he is, in fact, the eyes and ears of the school. 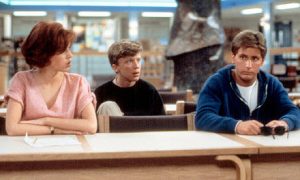 Writer-director John Hughes really seemed to know his audience when it came to the numerous seminal teen movies that he helped to create in the 1980s, and The Breakfast Club remains the best example to hold up as a movie that absolutely does what it sets out to do for its core audience. Listening to it many years later makes me wonder if it was always so ever-so-slightly clumsy and cliched or if my adult ears are now more cynical than they were in my youth. I suspect it’s a mixture of the two.

The film is very much an assembly of archetypes, as written/narrated by one of the main characters at both the start and end of the movie, but those archetypes are then, supposedly, twisted. These youngsters don’t want to be viewed as simply a brain, an athlete, a basket case, a princess, and a criminal, but they don’t really know how else to identify themselves, so they live up to those labels just as much as they want to discard them. 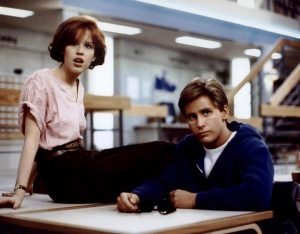 There are clumsy moments, to be sure, and everything is almost ruined by the awful moment in which Emilio Estevez gets pumped/dances around while stoned, but the cast all do well with what they’re given. Ironically, they all easily fit into roles that they would play more than once in the ’80s. Gleason and Kapelos are great as the two adults who view the kids very differently, but the kids are the stars, of course, and they shine in the many scenes that don’t weigh them down with an overdose of sentimentality. 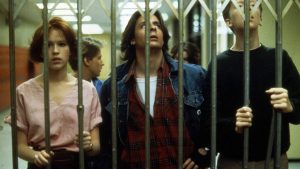 I also can’t end this review without mentioning the fact that this is yet another teen movie soundtrack that I still own, and enjoy. The most well-known track may be Don’t You (Forget About Me), by Simple Minds, but there are at least two other great ear-ticklers, one by Karla DeVito and one by Wang Chung. Did they do anything else of note? Not that I know of. But they helped, in their own way, to make The Breakfast Club a fantastic and memorable teen movie, and that’s good enough for me.