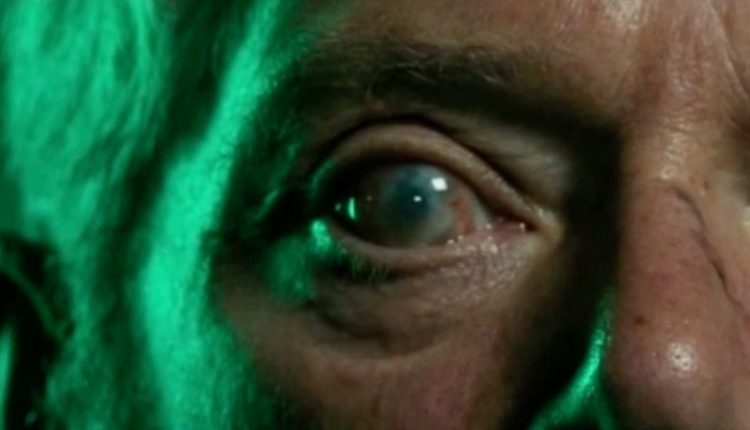 If you can remember the thrillers Wait Until Dark and Blind Terror then you will be familiar with the scenario here; people breaking into the home of someone who is blind. What you may be less familiar with is the idea that it’s the blind person who ends up being the most dangerous, laden with a deadly skillset and a dark secret.

It all starts with our trio of burglars (Jane Levy, Dylan Minnette, and Daniel Zovatto) planning one final job. After a long time spent playing it safe (not stealing cash, limiting their overall haul to under $10,000, factors that will limit their sentence if they get caught), they find one big score that could allow them to get away and start a new life. That score should be found in the house of a blind man (Stephen Lang), a pile of money that he was given as a settlement when his daughter was hit by the car of a girl with parents rich enough to keep her out of prison. The house is in the middle of a fairly abandoned area, and the robbers have a good plan, so everything should be pretty straightforward. Of course, they didn’t consider how dangerous their victim could be, or what else he might have in his home.

Director Fede Alvarez continues to develop his impressive filmography (which started with some great shorts, moved on to Evil Dead, and looks to be going from strength to strength) with this intense, nailbiting, horror movie. Some may label it as just a thriller, but I think the set-pieces, moments of bloodshed, and the wilder plot elements nudge this firmly into horror territory. The script, co-written by Alvarez and Rodo Sayagues, is a damn fine example of how to develop characters economically without sacrificing any screentime that could fit in extra tension or scares. It’s about as tight as you could hope for, allowing the whole film to come in at just under the 90-minute mark, with 2/3 of that time given over to expertly-sustained suspense.

It helps that the central “baddie” is played by Jane Levy, easy to like even as she’s plotting to rob a blind man (and there is an obvious, selfless, motivation for her criminal ways). Dylan Minnette plays the young man helping her, and viewers grow to like him because he’s motivated by his like of Levy. Daniel Zovatto makes up the last central member of the trio. He’s a tougher character, in the mix to bring things to a head and remind everyone that they’re playing a game with some very real risks involved. And then there’s Lang. He may only utter about a dozen lines in the film, if that, but his performance is suitably terrifying and believable (helped by the fact that he wears contact lenses that make his eyes seem milky white and sightless).

Overall, this is absolutely top notch genre fare. There are one or two moments which will force viewers to decide whether or not they’re willing to stay strapped in for the whole ride, but I encourage everyone to do so. It’s not necessarily a bad thing when a film manages to entertain you AND occasionally make you squirm.

Don’t Breathe is released on shiny disc here in the UK today. The Blu-ray includes various featurettes, some deleted scenes, and a director’s commentary. I highly recommend it.