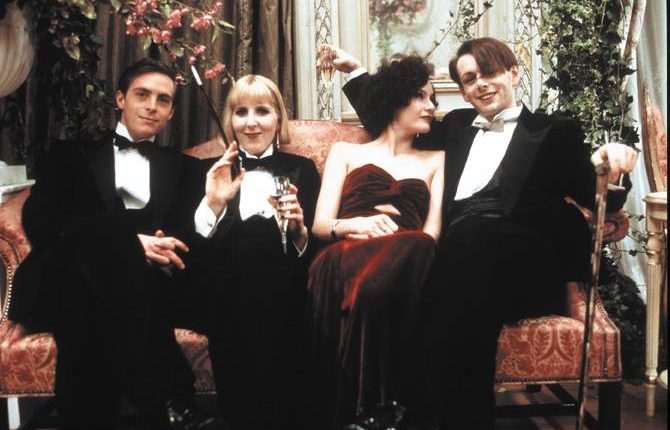 A microcosm of a decadent and brilliant age, now long gone, Bright Young Things is a gaudy, spangled delight.

An adaptation of Evelyn Waugh‘s novel Vile Bodies, the film is an insight into the sybaritic lives of a handful of wealthy young men and women, their ups and downs, and the looming threat of another war.

A fool with his money and his heart, Adam Fenwick-Symes (Stephen Campbell Moore) seems to be the luckiest and unluckiest man in the world. After his first manuscript is confiscated by customs officials, he must find a way to raise enough funds to marry flighty Nina Blount (Emily Mortimer). He is roped into taking a job as a gossip columnist after the former writer (James McAvoy) commits suicide. Soon, Adam begins making up scandalous gossip to entertain the masses. Around him float an eclectic group of characters, who come together to make a dazzling and fast-paced spectacle.

It is unsurprising that Stephen Fry’s directorial debut would be such a hit. Full to the brim with the usual wit we can expect from Fry, he captures the satire of the novel perfectly, and gives blithe characters a beating heart. You might find yourself falling for the secondary characters just as much as the protagonists. Thanks to the star-studded cast, they all come across as individual and well-rounded. It seems everywhere you look, there is a familiar face. Dan Aykroyd, Stockard Channing, David Tennant, Jim Broadbent, and Richard E. Grant, just to name a few, are all stars in the larger constellation of this glittering film.

But beneath its glittering facade, Bright Young Things has a lot of heart. Its speed matches the rapid tempo of the time, but it still manages to weave together full and varied narratives. Though they appear shallow at first glances, it is easy to love these characters. Fenella Woolgar shines as the wide-eyed, hedonistic socialite Agatha Runcible. Despite her cheerful indifference, her story quickly turns melancholic, but it is not made any less impactful by the joyful times that came before.

The film unfortunately slows down towards the end, though this may be because of the breathless excitement with which it began. It seems to run out of steam as it comes to a close, but Bright Young Things is a delightful film, interrupted by jarring moments of solemnity. To match the stunning cast, the costumes and sets are all so era-appropriate, you could not feel any more immersed in this world.

A bittersweet love story, Bright Young Things captures the eccentric flavour of a time gone by. The last of their breed, these hilarious socialites tell a surprisingly touching tale, and Fry’s sharp script is performed wonderfully.