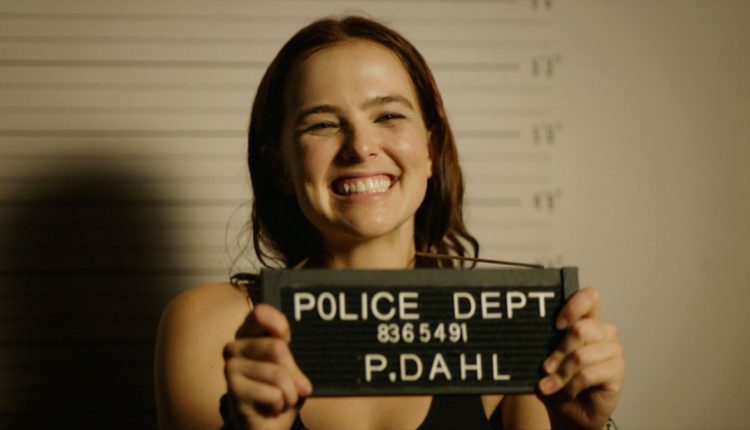 It is one thing to be bamboozled and feel kind of ridiculed about the whole affair. However, to be Buffaloed…well that is another kettle of fish worth frying in the pan. Director Tanya Wexler’s bubbly blue-collar comedy Buffaloed is a wacky Valentine ode to the chilly upstate New York-based enclave where freezing, frustration, and frivolity are encapsulated in the state of mind concerning one young woman’s expectation to arise above her daily doldrums. For the South Buffalo gal Peg Dahl (played with renewed effervescence by “Zombieland: Double Tap’s” Zoey Deutch) she needs to approach the end zone with any means necessary much like her local gridiron warriors the Buffalo Bills. The question remains: can she score on her own accord and find some convincing shine to her matriculating dim light?

The brainy Peg cannot seem to catch a break. Although academically gifted, she is hampered by the realities of attending the Ivy League college she simply can’t afford despite being accepted. So what is a smartypants siren supposed to do when she is strapped financially for money that she needs for the monumental tuition? Well simple…Peg goes into her monetary madcap mode as it backfires on her courtesy of scalping tickets. This ill-advised stunt earns the desperate Peg a four-year sentence behind bars. Naturally, Peg’s bad judgment had cost her big time.

As Peg re-enters society, her options are very limited as opposed to the past when she had academic brilliance but no bank account to finance her high-minded educational ambitions. So the only thing left that Peg can get her hands on immediately is taking on the tedious task of collecting debts over the phone. It is a thankless, shifty industry and the rewards for trying to round up cash primarily from impoverished folks looking to duck and dodge repayment is quite unthinkable. But hey…someone has to do it, right?

Indeed, Buffaloed meanders a bit and there is not much meat on the bone in addition to Deutch’s spunky role as the phone-dialing diva that somehow overcomes her low expectations in the drab debt collecting business to ruffle some mighty feathers along the way. Wexler is no stranger to off-kilter comedies as evidenced by the underrated gem Hysteria. Still, Buffaloed has some underlying charm to its inherent quirkiness as it does not do too much with its chuckling chaos that fruitfully lingers.

Screenwriter Brian Sacca’s scripted story will certainly capture the local feel and rhythms of the regional Buffalo atmosphere from the neighboring eateries to the colorful population of industrious characters highlighted by distinctive accents and attitude. Smartly, Deutch carries the narrative on her steady shoulders because of an impish performance where she is asked to be ebullient and cunning all in one sitting. Buffalo may not want to make outsiders quickly embrace the working stiff lifestyle but Buffaloed will certainly echo the happy-go-lucky eccentricities that other blue-collar cities wear as a badge of honor.

Buffaloed is an unconventional character study that wants to reach for every nuanced nugget it sends out. More often than not Wexler assembles a fun-filled vibe that is not always fully concentrated but yet enough to appreciate the intricacies of the breezy humor reverberating throughout the spry proceedings.