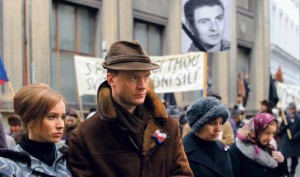 Agnieszka Holland’s superb three-part TV miniseries about the fight for liberty in a time of repression begins with the 21-year-old Czech student Jan Palach’s act of protest. Out of nowhere on a damp, chilly day in January 1969 he sets fire to himself using a bucket of gasoline in Prague’s Wenceslas Square (and subsequently dies) as a protest agains months of Soviet occupation of the country. Palach leaves a statement explaining he was one of a group who subsequently would continue these actions if nothing were done. Holland’s beautifully staged and photographed episodes show in detail what came next, a web of people and events all fanning out from this simple shocking one. 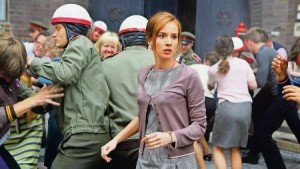 The authorities immediately mount a frantic effort to tamp down any further protest and find out who the others in Palach’s group are. Their belief ostensibly is that rebellion will bring on further Soviet repression: the purpose of Palach’s action nonetheless does come out. A police officer is put in charge of an investigation, Major Jire. He is played by Ivan Trojan, who recently also played the good cop fighting a corrupt system in David Ondrícek’s In the Shado (2012; SFJFF 2013), set in 1953, when the Soviets are using ex-Nazis to stage anti-Semitic show trials.

Later a Czech party hack and regional parliament member, Vilém Nový (Martin Huba), is manipulated by the Soviets to give a speech undermining Jan Palach’s protest, saying he was really a fascist nut who meant to fake his self-immolation but had it backfire. When news of this is published Jan’s mother Libuse (Jaroslava Pokorná) and brother Jiri (Petr Stach) call on beautiful young attorney Dagmar Buresova (Tatiana Pauhofova) to take on the party hack in a libel case, which becomes the focus of the action. This is cleverly intertwined with scenes involving members of Jan’s dissident group. Major Jiri finds the student who was closest to being Jan’s girlfriend, Hana Cízková (Emma Smetana), and when when she is devastated after Jan’s death coerces her into reading a fabricated statement in which Jan supposedly asks his allies to refrain from further self-immolation. 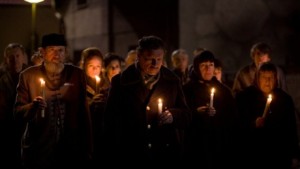 It gets more complicated and inbred, but in ways that seem thoroughly logical while you’re watching, and momentum comes from the energetic legal procedural story. Dagmar’s legal office-mate Vladimir Charouz (Adrian Jastraban) has a daughter, Vladka (Jenovéfa Boková) who’s one of the dissidents, and who’s found out by secret police Major Docekal (Igor Bares). Nový’s lawyer controls the judge in the libel case, who’s told what the outcome must be (Ivana Uhlirova). Within this context the young dissidents still strive and so does Dagmar, the beautiful attorney, who does everything to win the libel case. The Margaret Rutherford-like Jaroslava Pokorná as Jan’s mother becomes a surprisingly strong figure, an old peasant-y lady who continually grows more her son’s stubborn and explosive advocate.

Nonetheless the forces of repression are relentless and Dagmar’s doctor husband Radim (Jan Budar), as well as Libuse and Jiri, are battered and browbeaten by the authorities. Even Jan Palach’s grave is dug up and his coffin cremated and the ashes disappeared on the grounds that vistis to his grave caused disorder. Dagmar Buresova loses the case, which takes up much of the second and third episodes, but twenty years later Jan Palach is celebrated by protesters just before the fall of the Soviet Union, and the charismatic Dagmar became the first Czech minister of jutice in the post-communist era, closing titles tell us. 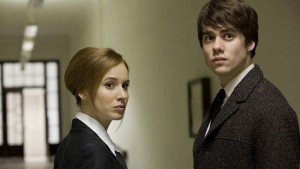 First time script writer Stepan Hulik maintains momentum, interweaves multiple characters and story lines, keeps the focus constantly on both repression and idealism, and yet avoids any easy or obvious climaxes or simplistic demonizing. There are always interesting people on screen. Dagmar’s office assistant and investigative ally Ondrej Trávnícek, really one of the dissenters too, is played by the very handsome Vojtech Kotek. It looks as if Dagmar and Ondrej will be the hot young couple of the piece for a while, even though Dagmar is married and has two children. One remembers Holland’s vivid use of young actors in earlier works like Europa Europa;Olivier, Olivier, and Total Eclipse.

Whatever happens though, the unifying thread is the balance of fear and repression against the will to resist. Seamless costume and period design and great photography by Martin Strba and Rafal Paradowski combine with uniformly good acting to provide a very classy mini-series (Holland has worked on “The Wire” and “Trame”). 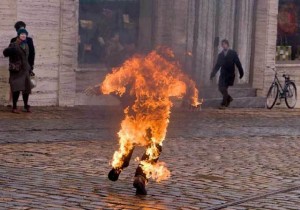 Burning Bush/Horící ker, in Czech was made for HBO Europe, debuted at Karlovy Vary and Roterdam, was also shown at Toronto, and was screened for this review as part of the New York Film Festival at Lincoln Center, Sept 2013. It is the Czech Republic’s entry for the Best Foreign Oscar.