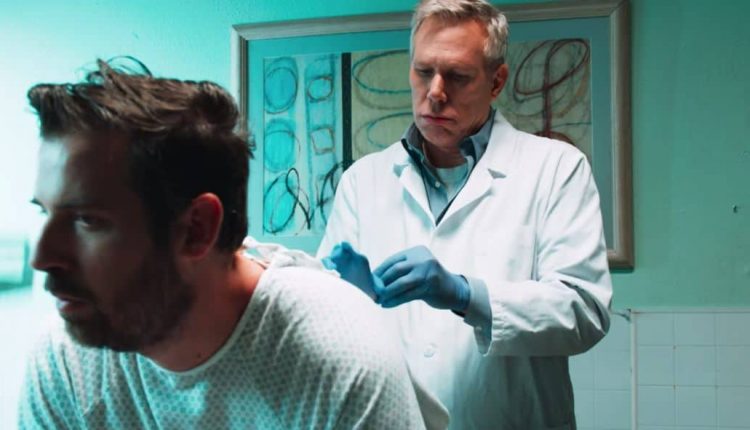 It is safe to say that co-writer/director/star Tyler Cornack’s strained, forcefully outlandish, and sluggishly nasty mystery and suspense comedy Butt Boy needs its sorry gimmicky ass kicked to the curb. This 100-minute prolonged gag about the possible criminal intent of an overactive anus seizing people against their will is about as cheeky as a quarantined outhouse. Cornack’s giddy crime caper pertaining to prostate prisoners may amuse some for its twisted sense of juvenile humor. For others, however, Butt Boy will be another dismissive farce striving for asinine-minded attention.

Clearly, Butt Boy aims to be outrageous with its so-called riotous insight in the merry madness of Chip Gutchell (Cornack), a guy that delights in shoveling random objects up his…shall we say Hersey highway? It goes without saying that Chip has a few screws loose but is unapologetic in his addiction to placing items up his derriere. Disturbingly, Chip graduates to bigger objects–namely animals and people–that become the focus of him overstuffing his gastrointestinal path. At this point, nothing is off limits to Chip’s swallowing buttocks ingesting kids, adults, and beasts alike. Suffice to say that Chip is the main butt of this sick-minded joke that persists.

Frankly, the only thing that seems excitable to Chip is his rectal-related recklessness. Otherwise, Chip’s dim existence goes through the mundane motions as an uninterested husband and father. The uneventful marriage to Anne (Shelby Dash) feels like a prison sentence. Chip’s job is a complete bore to him. While Anne remains frigid in the bedroom Chip needs something to stimulate his sexual drive so his drinking increases and gets out of control.

Chip eventually decides to join Alcoholics Anonymous to address his problematic drinking. However, the AA meetings cannot hide his rear end rituals of stuffing living people and inanimate objects up his anxious butt cheeks. Soon, Chip meets Detective Russell Fox (Tyler Rice) and becomes his AA sponsor. Currently, Detective Fox is in the middle of a puzzling investigation involving missing children. After awhile Fox starts to wonder about the strange vibes concerning Chip as he entertains the notion that his weird sponsor may be responsible for the absent children.

Fox’s hunch may have some validity given Chip’s creepy penchant for carrying out his butt boy-induced fetishes. In fact, the movie hints at any odd provocation that Chip may possess when it comes to his presence around the kiddies. There was a time when Chip spotted a mother-son duo at the park ages ago. Now this particular boy’s disappearance years later still has the public wondering about how he vanished. Was good ole Chip up to his butt cheek tricks regarding this missing youngster? What about a boy’s whereabouts regarding his incidental brush with Chip during an innocent game of hide and seek? Again, a child is miracuously gone as Chip somehow figures in the sordid mix. Of course, the movie teases the audience about how these kids could have been vacuumed by the butt boy’s perverse antics but Cornack never reveals this surreal curiosity.

Consequently, Butt Boy is merely interested in its throwaway childish shock value as it really does not delve into its low-rent silliness with any constructive bizarre imagination. Sure, the concept of toxic potty humor could have been more sharply irreverent had Cornack engineered the artistic ability to explore the complicated psyche of his booty-attacking bonehead. Unfortunately, there is no motivation for us to question what makes the perplexing Chip tick beyond his boredom and quieted despair. Cornack’s Chip is surprising flat and dull given his bum-bum urges that persist.

Sadly, the supporting turn by Rice as the slick-haried, formulaic gumshoe Detective Fox imagined in the flimsy fashion of a modern-day Phillip Marlow simply feels atmospheric and does not fit in with the sophomoric spirit of winking crassness being displayed. As a tandem joined at the hip in cartoonish intrigue Cornack’s Chip and Rice’s Detective Fox are both stock characterizations that bring no juicy drive or sense of clever sick-minded jubilance to this lazy comical oddity of misfires.

Painfully contrived and methodically doltish, Butt Boy strives for its validation of absurd fanny fun but this comedic crapper definitely needs its behind spanked.