This would-be documentary involving skateboarders is an interesting piece of work.  Rather than have the same sombre tones of typical historical pieces, filmmaker Marten Persiel focuses his energies in chronicling the societal difficulties of 1980’s Germany through something a bit more…radical.

This Ain’t California follows a group of East German friends who had bonded through skateboarding in their youth.   The doc highlights the life of one prolific member, Denis ‘Panik’ Paracek, a rebellious teen with a troubled childhood, in amidst the social division in Germany during the 1980’s. 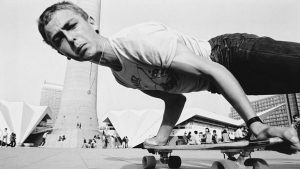 The curious thing about this is that the air of mystery around its footage.  Persiel has admitted that he has fabricated a portion of the documentary, so seeing the archival films and the emotion behind the stories told by the narrators makes you wonder how much of what you see is true – a sentiment that ultimately draws focus from the film’s enjoyment.

Still, the animated snippets and Super-8 childhood videos are skilfully interwoven and with such a different storytelling device (i.e. skateboarding) at hand, it is easy to get drawn into this so-called documentary.

Call it what you want, but the nostalgia and ‘people-power’ vibe behind It Ain’t California may have the goods to make documentaries ‘cool’ again.

This Ain’t California was out in UK cinemas on 6th December 2013.