Adapted from the short story by Clive Barker, Candyman is a bit of a modern horror classic. Written and directed by Bernard Rose, it mixes some social commentary, some urban legends and a load of intelligence to create a rich, satisfying, modern horror that also gave audiences a new horror icon.

Virginia Madsen plays Helen Lyle, a young woman working on a project with her friend, Bernadette (Kasi Lemmons), about urban legends. Their enquiries eventually lead the two women to the legend of Candyman. If you say his name five times in the mirror then he will appear to deliver death. This happened to a friend of a friend, of course, and people swear that it’s true. Further investigation leads the women to Cabrini-Green, an area where the residents all believe in the Candyman, and even leave him sweet tributes. Of course, it’s not long until Helen decides to test the legend. Which means that it’s not long until the Candyman (Tony Todd) decides to convert her sceptical outlook.

Candyman may have elements that allow it to appeal to fans of all ages, but it’s also squarely aimed at adults, which is always a rare treat in the genre. From the gorgeous cinematography, to the lush score from Philip Glass, to the age of the central characters, even to the surprisingly high number of scenes that deliver scares and tension in broad daylight – everything tells you that this is a film, despite the title, once or twice removed from your standard slasher flick.

It helps that Madsen is great in the lead role, and that Todd did such a good job that it’s hard to think of anyone else as Candyman (that voice, it’s all about that rumbling, growling, seductive voice as we see Helen brought under his spell). Lemmons is a likable presence onscreen, Vanessa Williams (NOT the one who starred in 666 Park Avenue) is a woman who ends up regretting ever meeting Madsen’s character, and the always brilliant Xander Berkeley is , well, brilliant as Madsen’s husband.

The film has its flaws, and those flaws are more noticeable over 20 years after it was initially released, but the good far outweighs the bad. In fact, there’s so much good stuff that it becomes great, not only because of the easy, fan-pleasing elements on the surface, but also because of the layering of the material and the way in which it explores the need for horror stories and urban legends without ever grinding to an abrupt halt. It’s cerebral, but never pretentious or dull. Sometimes people need to believe in villains that they can then blame for some of their ills, and sometimes those villains need to thrive on the strength of those beliefs. 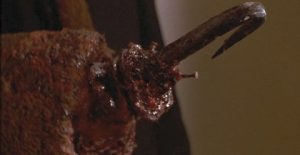 One of those titles that you have to check off your “to see” list if you haven’t got around to it already, Candyman isn’t just scary fun while you’re watching it. It also stays at the front of your mind when you next see a mirror and dare yourself to stare at it while saying his name five times.