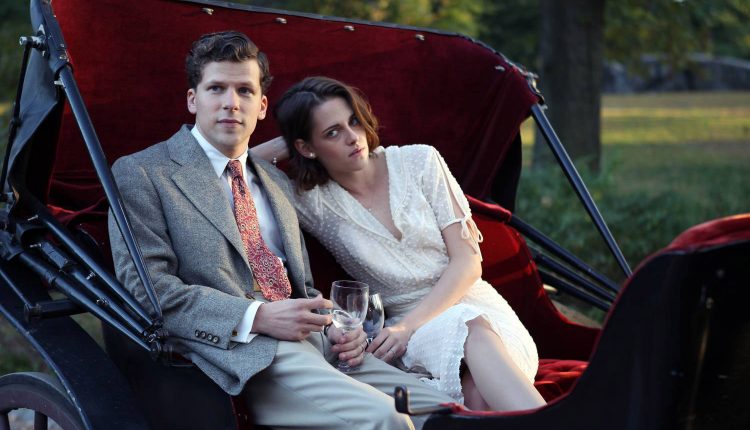 His avenues of finance may have changed, but as the customary use of a white Windsor typeface and chirpy jazz jingle in the opening credits immediately confirm, Café Society is Woody Allen once more strolling along the same streets he has frequented throughout his career. It’s a sweet and jaunty start to this year’s Cannes Film Festival; enchanting in appearance and elegantly acted. But is so severely jumbled in its directorial delivery, you’re left mourning the prospect that we may well never see any true movie magic from this legendary auteur again.

The title refers to the ritzy life of high-class New Yorkers that came to define the Big Apple in the years following the end of Prohibition, but we begin in early 30s LA, where young Bobby Dorfman (Jesse Eisenberg), a disillusioned Bronx-born youth, has just arrived with aspirations of taking Tinseltown by storm. Hired as an errand boy by his uncle Phil (Steve Carell), a hotshot & high-powered agent to the stars, Bobby begins to be swept up in the city’s vibrant spirit, and it isn’t long before he finds himself falling head over heels in love with his uncle’s beguiling, but romantically unavailable assistant Vonnie (Kristen Stewart).

In Allen’s work is an innate literary quality that’s creative & curious, yet lacks cohesive discipline. The addition of Vittorio Storaro’s spellbindingly sharp cinematography, which captures the opulence of Hollywood high-society with rich & creamy brush strokes that are as welcoming as the heat of the California sun, is warm & enticing, and yet a lack of energy within the script means such visual flair fails to wholly engage our attention – characters and narrative leadenly established through the director’s own prosaic narration, which he delivers throughout with a tiresomely impassive temperament.

What charms us are the cast. Jesse Eisenberg tactfully embodies the awkward magnetism we fondly remember being an intrinsic part of Allen’s own persona in the likes of Annie Hall and Manhattan, without ever lapsing into impersonation: the director’s wonderfully witty dialogue brilliantly brought to life through Bobby’s edgy demeanour. But it’s Kristen Stewart, an actress unfairly dismissed by many as simply having a sulky screen presence, who captivates. It’s a performance that’s subtle, never sullen. Vonnie’s level-headed intelligence and underlying strength is seductive, but it’s the pain we see, delicately etched in her eyes & echoing within her vocal inflections as Stewart slowly peels away the layers, which consume us, and when she takes an extended leave of absence around the halfway mark in order for the story to shift setting and settle in New York, we find ourselves longing for her as much as Bobby does.

Moments of sombre melancholy are striking, particularly given the predominately carefree tone. Allen’s direction is commonplace, his plot predictably hinging once more on a long-winded love triangle, played to a monotonously upbeat score that only serves to augment the time period. Supporting players – Corey Stoll has a ball playing Bobby’s thuggish younger brother, and Jeannie Berlin shines as his long-suffering mother – fail to function due to the script’s discursive nature: an alluring Blake Lively is notably ill-served. And strands of satire levelled at the film industry’s Golden Era fall flat in comparison to the more composed parody seen in the Coen Brother’s recent caper Hail, Caesar.

There are brief, breath-taking instances when we’re reminded that Allen can conjure a spell with just an image – his continued adoration of the New York skyline symbolised in a single, gorgeous shot of the city taken from Central Park at dawn. It’s in such moments of romance that the magical memories of Woody’s past successes gain prominence, what a shame it is then that there isn’t more to love here.