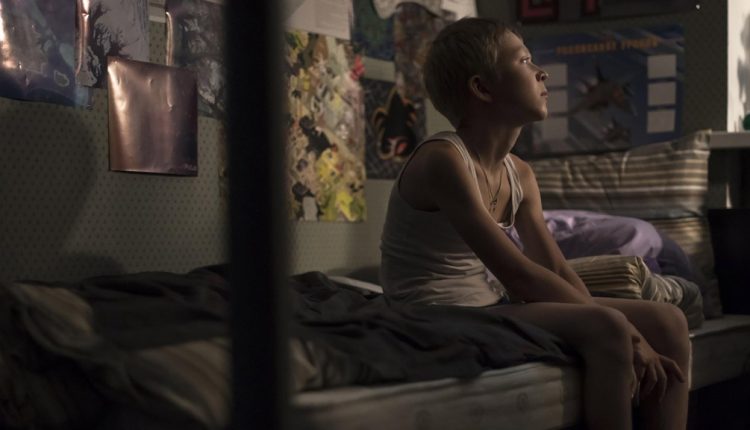 Russians – their motherland is so cold, and so are the people… Loveless, director Andrey Zvyagintsev’s frosty procedural drama, is a film so conceptually forceful, it has the clout to leave a mark on your psyche that’s as clear as a footprint made in freshly fallen snow; a cruel, caustic tale shot against a stark and sterile backdrop. To label it a frontrunner for this year’s Palme d’Or may be impetuous given that it’s only the first contender to play for critics in Cannes this year, but to bet against it strikes one as being similarly imperceptive.

Zvyagintsev establishes an atmosphere of glacial despair in the opening frames; the stinging notes of Evgueni & Sacha Galperine’s deeply unsettling score fused with icy images of the harsh woodland vistas that surround the film’s suburban setting. It is here that we meet Alyosha (Matvey Novikov), a boy on the cusp of becoming a teenager. His hunched appearance and insulated manner cuts that of a troubled figure, but it is only after he has returned home that we discover the severity of his situation.

Alyosha’s parents, Zhenya and Boris (Maryana Spivak and Aleksey Rozin), hastily married after discovering they were going to have a child. But now, some 12 years later, they are preparing to divorce and go their separate ways: Boris to live with his heavily pregnant girlfriend, Masha (Marina Vasilyeva): Zhenya to the ritzy apartment owned by her dishy older lover, Anton (Andris Keišs). For now though, the pair continue to share the same suffocating space, with their son sat in the next room – a haunted, heartbroken shell of a child.

An early scene reveals the crux of Zhenya and Boris’ current dispute; neither of them have any interest in taking custody of Alyosha. During a painfully hostile exchange, the pair trade vitriolic insults as they practically try to blame each other for the inconvenience of their own son’s existence; the air around them suffused with a seething, vindictive scorn. It’s a scene almost too excruciating to witness, Zvyagintsev holding a tight focus on the couple, before suddenly panning around to reveal that, unbeknownst to his parents and us, Alyosha was listening to everything they said. His eyes drowned with tears and his mouth open as if to emit a blood-curdling scream, but all we hear is a splintered silence that echos within the void.

From these harrowing foundations, Zvyagintsev develops his story with a deliberate pace: Oleg Negin’s slow-burning script concentrating on Zhenya and Boris as they endeavour to move on with their lives. Over the course of an extended opening act we see the nights spent with their respective partners, both of them so fixated on their own happiness that they never once pause to consider the wellbeing of their son, who by contrast sees a world crumbling down around him.

Then, one morning, Alyosha disappears. Was he kidnapped, or did he run away? His friends haven’t seen him, neither have their neighbours. He hasn’t been to school in days, and there are barely any traces of him on local CCTV; he’s vanished, and suddenly his parents find themselves agonising over the son they previously preferred to ignore.

The mystery that then unfolds grows in ways that are startling, unexpected, and utterly compelling. This is a director who sculpts his art with a careful precision. The camera moves with a supple fluidity at times, as if scouring the landscape for clues. And at others it becomes so firmly rooted to its position, you’re practically craning your neck to see beyond the edge of the screen, as Zhenya and Boris retain the services of a voluntary rescue team to assist their increasingly desperate search.

Like Leviathan, Zvyagintsev’s full-blooded study of his country’s broken socio-political system, Loveless is a film built around subtext; masculinity and motherhood are both pondered; tinges of Haneke & Bergman are present. There are also various snippets of newsreel played at opportune intervals, exploring Russia’s political state in the months prior to Putin’s intervention in the Ukraine – the narrative being set roughly between 2012 & 2014.

Yet in this critic’s eyes, Loveless is, at its core, a reflection on empathy. We see evidence of that stony Russian demeanour early on as Zhenya berates her son for crying. And later, as horrifying footage from the frontline in the Ukraine is circulated on the TV, we watch Zhenya and Boris both look on without a flicker of concern for those they who are suffering; content instead that they are no longer faced with such misery.

Spivak & Rozin render their characters with a self-absorbed heartlessness, but Zvyagintsev artfully encourages you to feel, in their darkest moments, a swelling sympathy for them both. This is a bitter, bruising chronicle of a broken family, but it reads as a dissection of a fragmented global society – where decency and compassion are now considered taboo. Never is this more confronting than in one of the film’s final shot; a piercing stare pointed straight to the audience. We may be the spectators, but in Zvyagintsev’s eyes we are also the subjects.