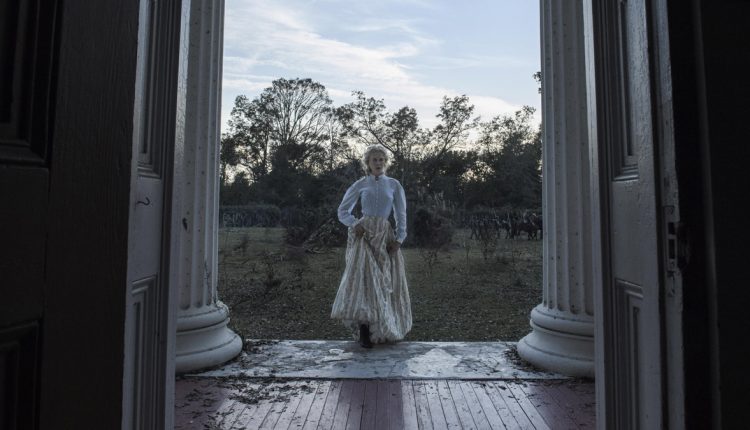 True to its title, The Beguiled is a film that will charm you, deceive you, and ultimately captivate you: a peppery period drama that unfurls as a piece of rousingly pure cinema. Comparisons with the Don Siegel/Clint Eastwood original from ’71 are, perhaps, inevitable, but to blithely label this version as simply being a remake of that film would be to unfairly diminish writer/director Sofia Coppola’s singular vision; this is less a retelling of that story, and more a retooling of the Thomas Cullinan novel – ‘A Painted Devil’ – on which both films are based.

The set-up, however, remains the same. As she walks through the woods of rural Virginia one morning, searching for mushrooms, young Amy (Oona Laurence), a pupil of the local all-girls boarding school, stumbles upon the muddied body of wounded Union soldier John McBurney (Colin Farrell); the year is 1864, and the Civil War has now been raging for 3 years. Unable to walk having been shot in the leg, and with the hums of battle drawing nearer to his position, John desperately asks the girl for help, and though she is initially apprehensive, she eventually acquiesces, compelled by her own sense of Christian duty.

Having been brought back, John is immediately thrust into the care of its haughty headmistress, Miss Martha Farnsworth (Nicole Kidman); who runs the school with the help of the more equanimous Edwina Dabney (Kirsten Dunst). Only a handful of students remain in Miss Farnsworth’s charge, the war having caused many of them to return home, and days are now primarily divided between lessons, play, and prayer, while outside in the distance, a symphony of canon fire can be heard edging ever closer to the front gates.

Life for the girls has been somewhat sheltered to say the least, and soon John’s arrival begins to cause a stir. Farrell plays the part perfectly, his twinkling charm as bewitching as the hot sun streaming through the window, saturating the air. And it isn’t long before the atmosphere is engulfed by sexual tensions that John is more than happy to exploit for his own imperious gain. Contrasts with Coppola’s woozy debut feature, The Virgin Suicides, are fair, although there are also hints of Powell and Pressburger’s Black Narcissus within the darkly grand milieu.

Shot on smoky 35mm stock, Coppola has bathed her film in a seductively gothic beauty; the school lavishly shaded with pastel colours and dusty shadows. Music has always been a fundamental component in her filmography, yet here her use of it is more sparing, the score – delicate, furtive, composed by French rock band Phoenix – skilfully used to stoke the increasingly pressurised narrative.

The Beguiled is easily Sofia Coppola at her most playful; a prickly potboiler that she delights in holding at a steady simmer, slowly elevating the intensity before finally turning the dial up to its highest degree. It’s here that the friction within the school erupts into something far more shocking; the discovery of an unexpected affair igniting a moment of conflict that culminates in one character having to have their leg amputated; “bring the anatomy book,” a bloodied Martha demands with a feisty relish.

There’s a refreshingly venomous humour to Coppola’s script that deftly serves the performances of Nicole Kidman and Elle Fanning; both alluringly, enigmatically poisonous characters. Yet her elegantly precise direction, and inherent gift for storytelling allows for each character to be sketched with a significant degree of empathy.

Kirsten Dunst, in what is arguably her richest role since Melancholia, imbues a crucial level of compassion to what is an increasingly feverish plot; inhabiting Edwina with a quiet, painfully prolonged loneliness that tempers the film’s more joyously extravagant sensibilities. It’s a heated tale, but one that’s told with a human heart; consider me beguiled.