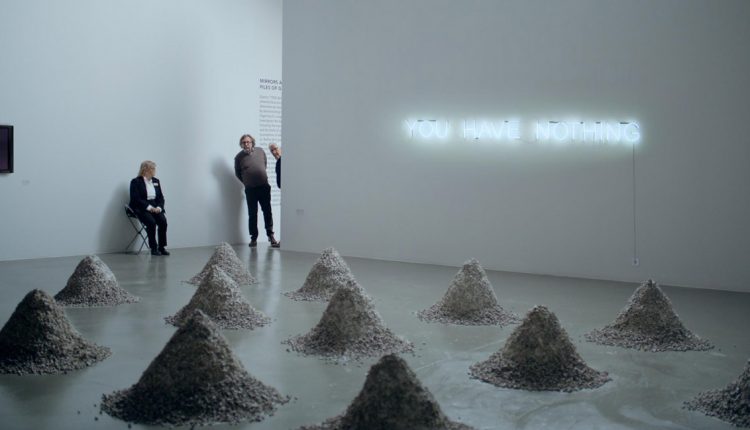 The Square represents stability and order; a space in which “everyone has equal rights and responsibilities.” Inevitably though, the area that surrounds The Square is a swirling pool of chaos that cannot be controlled.

It is within this vast, global expanse outside of The Square that Ruben Östlund lays his scene: specifically in Stockholm, where Christian (a staggering debut performance from Claes Bang) works as the curator of a contemporary art museum. His personal life is a peaceful bourgeois existence: he drives an electric car, is a divorced but devoted father to two beautiful young daughters, and gives generously when he can to those who are less fortunate.

In his role as curator, meanwhile, Christian is tasked with using the space available to him to display unusual, innovative, and exciting art works that help inspire others, and always encourage debate. He’s a man who’s proud of his esteemed reputation within the creative community, and with the unveiling of his latest acquisition, The Square, now just days away, he’s convinced that his credit is about to rise once again.

Then, one morning, something happens to Christian that ruptures his status quo; whilst walking to work, a con artist who poses as a bystander to a domestic disturbance mugs him in broad daylight. Robbed of his cufflinks, his phone and his wallet, Christian suddenly becomes consumed by the fallout. His irrational response, posting threatening letters to every flat in the apartment block where he traces his phone signal to, soon finds him dragged into a deeply uncomfortable standoff with one of the building’s residents. And if that wasn’t enough, the advertising campaign created by the museum’s PR team to help promote the launch of The Square has suddenly come under intense public scrutiny for its unexpectedly controversial content.

Share3
Tweet2
Pin
Share
5 Shares
As with his previous film Force Majeure, and, more comparably, Play – his expertly crafted exposé of adolescent bullying from 2011 – The Square sees Östlund once more exploring the themes of trust and tolerance in a selfish society that have dominated his oeuvre. Only this time he’s working from such a broad canvas, it’s almost impossible to fully comprehend; so vast it makes the Bayeux Tapestry look like a thumbnail sketch.

Östlund’s direction is barbed and authoritative, his films designed to make his characters suffer and his audience squirm. The centrepiece here is, undoubtedly, an excruciating banquet that’s thrown by Christian for many of the museum’s patrons, with the entertainment provided by a performance artist (Terry Notary) who inhabits the role of an alpha-male ape, and seemingly has no comprehension of where the boundary between his routine and their reality lies.

Other highlights include a narrative through line involving Christian’s relationship with an American journalist (a magnificent Elisabeth Moss), which includes a riotously awkward post-coital argument about condom disposal, and culminates in a confrontation that takes place in front of an exhibit depicting a precariously balanced stack of chairs that are always mere moments from toppling; one of many visually comedic nuggets the director liberally sprinkles his film with.

What lingers though, are Östlund’s more candid observations. There are some truly cutting comments being made here about the magnanimity of the modern age, with a recurring motif of homeless beggars on the street, consciously ignored by other pedestrians, likely to be a sight so familiar to so many, it would take all of your concentration to stop yourself writhing with shame and discomfort; DP Fredrik Wenzel’s penetrating camera work mercilessly aggravating the pervading sense of unease.

Clocking in at close to 2-and-a-half hours in length, it’s certainly Östlund’s most indulgent film to date, but it is also, perhaps, his most impressive. Fans of Roy Andersson’s Living trilogy will undoubtedly find much to mine from The Square’s absurdist humour and grotesque human reflections. Like those films, it’s articulated through sharp satire and sad truths: simply stunning cinema.