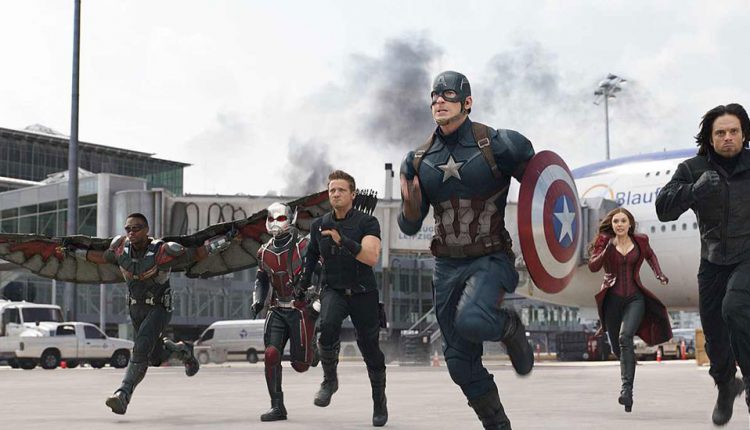 With great power comes great responsibility, and in this onscreen world of heroes and villains, the Russo Brothers are true beacons of hope. While the second sequence in Marvel’s Cinematic Universe was, predominately, a disjointed assortment of spandex-laden adventures – saddled with insurmountable expectations, and overwhelming amounts of exposition – this dynamic directing duo proved themselves worthy with their brilliant work on Captain America: The Winter Soldier. And now they’ve been called upon once again, swooping in like saviours from above to reignite the franchise at the launch of its Third Phase.

One glance at the cast roster for Captain America: Civil War confirms that this is more than just another instalment in the First Avenger’s story. But crucially, writers Christopher Markus & Stephen McFeely never forget that this is chiefly a sequel to Steve Rogers’ previous solo outing. And so we begin with a flashback that fills in some of the gaps in Bucky Barnes’ (Sebastian Stan) past, transporting us to Hydra’s Siberian stronghold and showing how they brainwashed Buck into becoming the Winter Soldier; a dark & enticing prologue conditioned with a colour scheme so piercingly cold that it’s almost a relief when we jump forward to the present day, joining Cap (Chris Evans) and his team on a mission in Lagos.

The target of this aforementioned assignment is a terrorist group intent on stealing a biological weapon. The operation is a success, but in the process of achieving the objective, Scarlet Witch (Elizabeth Olsen) inadvertently detonates a bomb & kills a number of civilians whilst attempting to save Steve’s life: an event that triggers the forging of the Sokovia Accords, a United Nations consensus designed to limit the collateral damage left in the wake of the Avengers, by regulating their activity.

This is, perhaps, the first time in the MCU’s history where it has truly felt like violence comes with a consequence, and as such the stakes strike with far greater impact. The Russo Brothers draw from their own work as well as Joss Whedon’s Avengers movies here, but it’s primarily Peyton Reed’s Ant-Man from which Civil War takes its cue – shifting the Marvel formula in a way that reins in the scale, whilst ensuring the risks remain very real.

The directors continue to play on their sitcom background, relying on the sharp wit of Paul Rudd’s Ant-Man, Anthony Mackie’s Falcon, and most tantalisingly Tom Holland’s Spider-Man (the young Brit making his Marvel debut in magnificent, wisecracking style), to express their steadfast refusal to submit wholly to the darkness. Yet from the outset, the mood has a more sombre air to it than any other addition in the Marvel canon: despite all that’s fantastical, this is very much grounded in reality.

Quite unexpectedly, it’s Daniel Craig’s brilliant Bond reboot Casino Royale that’s regularly brought to mind. Like that film, here we see our perceptions and attitudes towards the identities of different characters we know & love tested in a profound way; Robert Downey Jr. rises to the challenge strikingly, channelling a raw anger & sensitivity, particularly in the final act, which allows Tony Stark (aka Iron Man) to gain some vital personal growth.

As The Winter Soldier was, Civil War is principally driven by an emotional energy that’s charged with current political concerns: the focus, in this case, being on civil liberties, and whether they are something worth surrendering for the sake of safety and security. While Tony is in favour of government oversight – consciousness over his actions having finally caught up with him – Steve remains wary, Hydra’s infiltration and manipulation of S.H.I.E.L.D. still lingering in his mind.

Those keen to sink their teeth into a morally murky thriller are sure to get their fill – the script comprehensively considers both sides of the argument, but tellingly refuses to offer any easy answers. But fans simply looking for the bombastic joys that are intrinsic to the Marvel brand will also have their appetites sated.

The effects of the Accords soon fracture the Avengers into two factions – Bucky, Falcon, Ant-Man, Scarlett Witch and Hawkeye (Jeremy Renner) siding with Cap, while Black Widow (Scarlett Johansson), Vision (Paul Bettany), War Machine (Don Cheadle) and Spider-Man join forces with Tony. And soon the stage is set for a rambunctious royal rumble; not a frowning & portentous slugfest à la Zack Snyder’s insufferably incoherent Batman V Superman, but a proper superhero smackdown – a giddy and gargantuan delight, carefully choreographed in a way that allows the action to breathe and feel like the film your inner child has always deserved.

Having to establish not only Spider-Man, but also Black Panther (Chadwick Boseman, effortlessly cool & considered) into the MCU – the latter entering the fray while in personal pursuit of Bucky – it would be easy for the Russo Bros to be overcome, as Joss Whedon’s direction noticeably was in Age of Ultron. But they manage to juggle the film’s countless spheres with a smooth and seamless fluidity – only Daniel Brühl lands with a crash, his incarnation of Helmut Zemo operating merely as a device designed to push the plot.

Areas for improvement within the franchise are still apparent. Notably in its attitude towards its female contingent, which continues to be ill served in this male-dominated landscape – something that, dishearteningly, feels more & more ingrained within the MCU’s DNA. But progress is beginning to be made, with both Black Widow and Scarlett Witch being propelled gently towards the centre ground here. And if anyone has the power to make more headway, it’s the Russo Brothers: their creative confidence and courage isn’t just something this saga deserves, it’s something it needs.