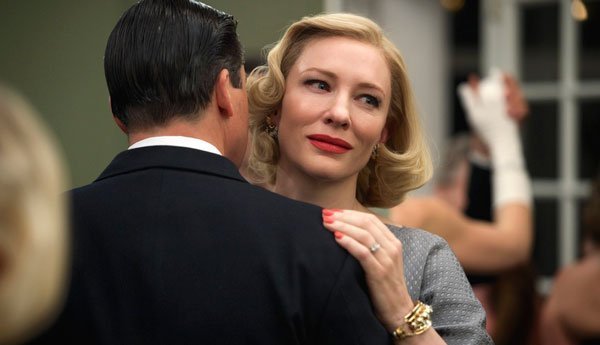 Carol is a film crackling with opportunity, rich in period setting, richer still in personal relationships built up, torn down and glued back together with messy elegance. Returning once more to his favoured 1950s American backdrop, Todd Haynes has crafted a convention defying romance at once simple and complex. Straight forward in the longing he creates, nuanced in the battles that must be fought, this is a sublime achievement.

Adapted from a Patricia Highsmith novel, an author whose work seems preternaturally disposed to good cinema, Carol takes place in 1950s New York, a world of smooth fashion, swinging bars and buttoned up morality. Women can work, and perhaps even dare to dream, but eventually it’s marriage and children that beckon. This is the fate that has befallen elegant Carol Aird (Cate Blanchett), and the one that repels young shop assistant Therese Belivet (Rooney Mara).

Carol has everything and nothing. She lives in a big house, has a daughter she adores and never wants for money. She’s also in the midst of a divorce and custody battle that threatens to get ugly, and is unwilling to defer to a society that labels her preference for women distasteful. Her husband Harge (Kyle Chandler) knows about her past, casting insidious comment on a close relationship with ex-lover Abby (Sarah Paulson). Later, when she brings Therese back to her home, he rebukes her bold behaviour, practically spitting the word in her face.

Therese suffers the problems of youth. She has an energetically attentive, if maddeningly conventional boyfriend in Richard (Jake Lacy). He wants to take her to Europe before settling down in marriage. She’s not so sure. When they part, he tells her he loves her. She simply says goodbye. Leaning towards experimenting with photography but stuck in a department store, it’s a chance encounter with Carol, out shopping for a Christmas present, that opens up a universe of repressed emotion. In an electric lunch, the nervous Therese defers to her sophisticated friend even as their eyes flirt voraciously. A trip west for the holidays sees this early promise blossom into something beautiful, only for their relationship to provide the ammunition Harge needs to attack Carol for immoral behaviour.

It’s this theme that comes up time and again in Haynes’ work, the outsider chafing at the strictures of a society keen to humiliate them for alleged depravity, the unlucky individual forced to deny their own desires by prudish faux morality. He brings all this to screen without political grandstanding. Blanchett only gets to cut loose once, bravely laying her cards on the table during divorce negotiations. The rest of the time, the two communicate through furtive looks and glancing contact. A hand rests on a shoulder, hair is self-consciously brushed away. It’s a subtle courting ritual that develops into a highly charged sexual encounter in the unlikely town of Waterloo (population just over 12,000 in case you were wondering). The camera toys with them before finding the perfect rhythm for a sex scene that soars far above the ordinary.

Haynes has a real knack for framing shots, and a beautiful propensity to move the camera gently in on faces during pivotal moments. With a mildewed, grainy tinge, the cinematography is superb throughout, as is the production design that once again captures the era with unerring precision and burning intensity. Working again with Sandy Powell, the costumes in particular are a marvel, vibrant and authentically varied without ever feeling forced.

The final praise belongs to the two leads. There’s a symmetry in their pairing, both strikingly austere faces that crease with emotion when needed, while remaining passive and watchful the rest of the time. They give the impression of two trapped souls sheltering from a world that won’t have them. Blanchett, probably the finest actress of her generation, and Mara, the most exciting of the current wave feel like a real love story, not a manufactured period drama.

Haynes has made several good films before; this might be his finest. A romance that’s both tragically beautiful and beautifully tragic ultimately ends on a note of hope. If Carol and Therese can’t shake off the straight jacket, they at least succeed in loosening a couple of straps.