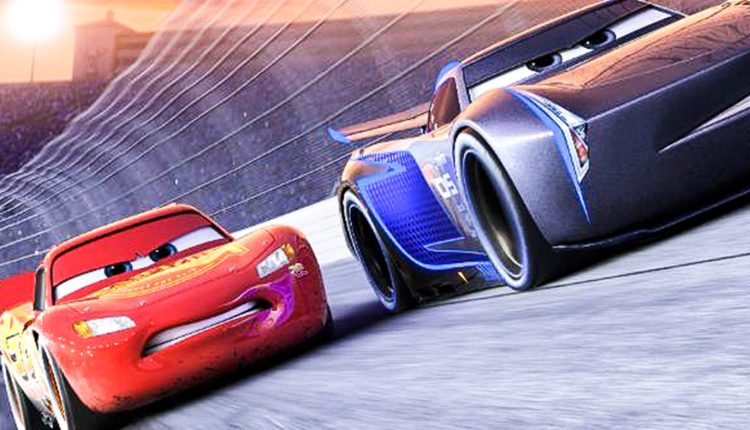 We’ve been here before, in that pole position of familiarity, isn’t this where the franchise began? Cars 3 just covers the same racing track as once before but this time Lightning McQueen is on the brunt end of realisation filled with a certain Déjà Vu that this franchise’s days lack the smoked immersed thunder but female empowerment comes speeding through the flames like a Phoenix.

Lightning McQueen (voiced by Owen Wilson) is stuck in the memory of his youth, once the fastest on the track and adored by all, his advancing age now holds him back, not ready to let go of his youthful glory, it could be time to take a step back and let the new blood take over his title and quite frankly Pixar need to follow suit for this well groomed but exceptional monotonous animation.

Forced off the track by slick yet cocky newcomer, Jackson Storm (voiced by Armie Hammer), which has McQueen battered and out for the count, he is forced to go back into training after months hauled up in his self-pity. Entering the high-tech training facility of Rust-eze, which has been bought out by a rich super-fan Sterling (voiced by Nathan Fillion), and allocated a female trainer, Cruiz Ramirez (voiced by Cristela Alonzo), McQueen wants to run before he can walk. When he can’t quite get to grips with the shiny new equipment, he begs for one last chance and to train the old school way accompanied by a struggling Cruiz.

As McQueen goes back to his roots and that of his own Mentor, the dearly departed Doc Hudson, which is flowered with flashback scenes and dreamlike sequences of Paul Newman’s dulcet tones. Cruiz and McQueen build on their friendship via a few shaky speed bumps along the way, Cruiz having never dreamt of being a trainer always wanted to be a racer but those around her always filled her with self-doubt, putting barriers in her way. It’s this narrative layer that gives this third outing its saving grace, the empowerment endorsing girls on the right track, that they can, in fact, obtain their dreams despite the words from those in power of discouragement, in a sport dominated by the arrogance of male cars it’s a female’s steely determination in realising her dreams that destroy the myth of the men only club, guided by a man.

Burn rubber at lightning speed it does not, a slow starter of how to let go of one’s ego in order to bolster another in a child charmer competition of life lessons. Cars 3 will be embraced by the very young with a subtle tenderness that’s polished for the fanatical eye, but it offers up a lack of creativity from a studio that should turn out the lights on the duty old racing track.

NEWSFLASH! FrightFest looks for the next star shocker ……