As harmless and inoffensive as they come, Castles In The Sky is also an undeniably entertaining movie, anchored by a fine performance from Eddie Izzard, wobbly Scottish accent aside. It’s set in some fine British countryside, utilises some fine British actors, and even seems to centre on that favourite British topic of conversation, the weather. If it was any more quintessentially British then it would be wearing a tweed suit while drinking tea and eating scones.

Izzard plays Robert Watson-Watt, the man who ended up utilising radar in a way that would help Britain spot the German bombers as they tried to attack. He wasn’t alone, of course. Skip Wilkins (played by Karl Davies) was his main partner, but the whole team worked together, and worked damn hard, to get the results that they needed.

With everything kept pleasant and jaunty by director Gillies MacKinnon, working from a decent and obvious script by Ian Kershaw, this is as predictable as it is genteel. It’s light and sunny throughout, in terms of disposition, and even the moments of anger and frustration are shown in a way that’s more “oh, darn” than “aaarrrgggghhh *expletive deleted*”. 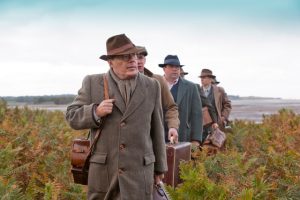 Izzard does very well as the lead, but it’s not the most testing of roles. He has to look smart and polite. He, or any member of his team, has to play about with something until it leads to a Eureka! moment. And he has to look passionate enough about his scientific work. He does. Davies has to do exactly the same. He does. Laura Fraser is the poor, lonely wife, who has to look on as her husband goes about his secretive work. She does. There’s the government bod (David Hayman) who doesn’t think the project should be receiving funds, and Julian Rhind-Tutt is very good as the man tasked with overseeing the motley crew, at times cautiously optimistic before reverting back to cynicism when immediate results aren’t as glowing as expected. The only sour note in the casting is the decision to make use of Winston Churchill (played, I believe, by Tim McInnerny, who I usually enjoy seeing onscreen).

Thankfully, the central story is one worth telling, and it’s told well. All of the big moments are covered, including the toll that the whole episode took on the personal life of Watson-Watt, and I’m sure that this is a perfect primer for those about to delve into some deeper research. In fact, it encourages people to look further (well, it certainly encouraged me, at any rate), which is no bad thing.