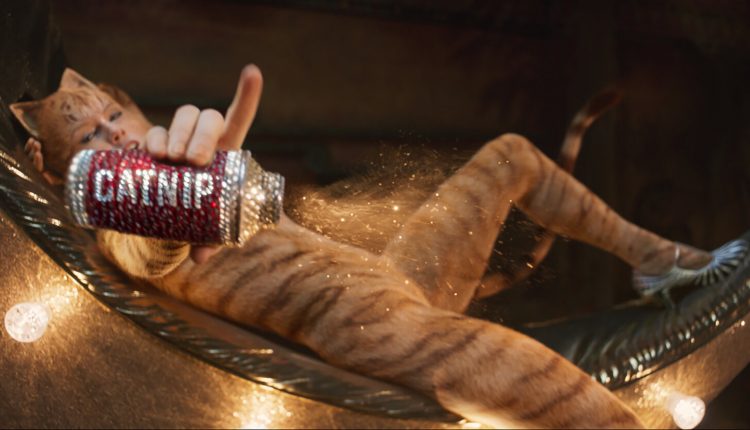 Cats is one of the most popular and longest-running musicals of all-time. Take the Oscar-winning director of Les Miserables. Add a cast that includes a Dame, a Sir and pop royalty. The purrfect recipe for success right? Scratch that thought!

Rather than being as enticing as a giant pile of Dreamies, the end result is an un-fur-tunate, hiss-terical Catnip-fuelled nightmare.

The plot of the musical, adapted from T.S. Eliot’s Old Possum’s Books of Practical Cats, is famously nonsensical. In fact, The Unbreakable Kimmy Schmidt did an entire episode based around that fact.

As far as one can make out, a stray cat joins a death cult of cats taking part in singing competition a la A-Meow-ican Idol. There an ageing cat, who has lived for 99 years, will crown a winner who will be sacrificed to the feline Gods in exchange for ever-lasting life and wear their skin as fur coat…

The film has been rated U by the BBFC. However the much-lauded Digital Fur Technology transforming the cast into humanoid felines will haunt children’s dreams for years to come. We’re looking at you Idris Elba!

It is reminiscent of the de-ageing technology used in the recent MCU films and The Irishman. There, the initial uncanny valley shock wears off quickly and fades into the background to let the performance come through. Here the assault to the senses is never ending. It is no wonder the film begins with a human dumping their cat in a bag. You might too if your cat had a creepy human face and hands.

If you used up one of your nine lives every time a cat appears and sings, you would be dead long before Jennifer Hudson gets the Les Mis treatment and sings in close up with snot running down her face. Or the moment Taylor Swift’s burlesque cat Bombalurina arrives to awaken feelings of confusion not seen since Jessica Rabbit slinked onto cinema screens in Who Framed Roger Rabbit.

To be fair, it is not totally a-paw-ling. Sir Ian McKellen gives his performance of Gus the Theatre Cat the same level of respect, gusto and that he would if he were playing King Lear.

With all the cats dreaming of ascending to heaven based on their talents, they forgot one thing. As another movie told us, it is in fact All Dogs Go To Heaven. These Cats are sadly destined for movie hell.