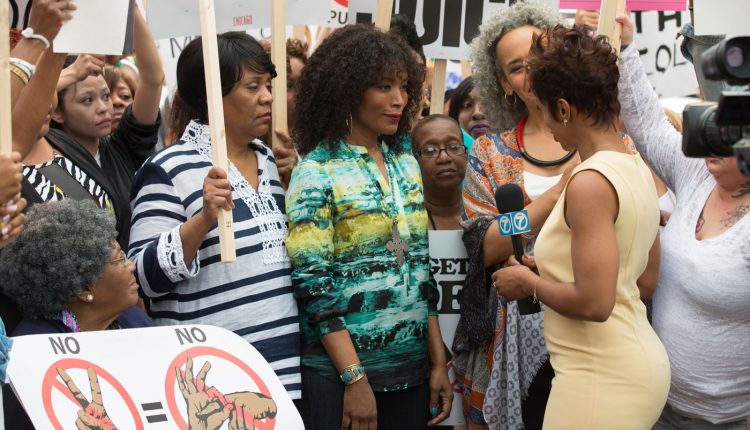 Filmmaker Spike Lee has never shied away from highlighting urban crime in his features. Since his directorial debut in 1986, his features have made him a key figure in black cinema, and he was awarded with an Honorary Award last year for his contributions to filmmaking. While recent features such as vampire film Da Sweet Blood of Jesus and the poorly received Oldboy remake may have left a blip in his career, he is back with his boldest film to date.

Inspired by Greek comedy Lysistrata, Chi-Raq it is set in Chicago’s Southside. Sick of the growing violence between rival gangs, Lysistrata (Teyonah Parris) influences all the local women to impose a sex ban until there is peace among their men. In response, Lysistrata’s gang leader boyfriend Chi-Raq (Nick Cannon) intensifies his war against rival Cyclops (Wesley Snipes).

From the offset, Chi-Raq is a risky feature. It not only emphases on urban crime and the growing influence of street gangs, but it is accompanied by Lee’s visual style and screenplay, as well as the blunt, occasionally humorous rap lyrics. Not since Baz Luhrmann’s adaptation William Shakespeare’s Romeo + Juliet has guns mixed with classic theatre on-screen, and it comes at a time where gun crime in the US has never been more prominent. In this aspect, Lee manages to blend the old with the new, and combined it with a vibrancy that contemporary audiences will appreciate.

From the bold opening accompanied by Cannon’s ‘Pray 4 My City’ and the flamboyant narration by a boldly dressed Samuel L. Jackson, there is no escaping the satire of Spike Lee’s latest piece. The premise of such a significant problem – gun-related violence – can be appeased by abstinence gives an updated meaning to the phrase ‘make love, not war’ and the side-effects of this ban is comical. The male characters go to extreme lengths to satisfy their primal urges but are denied at every turn, showing audiences who really wears the trousers here. The theme of feminism is also consistent throughout the film, and the collective stand by Chi-Raq‘s female characters, along as their peers, shows off the true meaning of girl power. Previously seen as decoration, the women invoke a sense of empowerment in a world where men supposedly rule the streets.

The cast highlights an array of African American talent, with several such as Snipes, Jackson and Angela Bassett having worked with Lee before. Certain characters like grieving mother Irene and passionate preacher Mike Corridan (respectively played by Jennifer Hudson and John Cusack) bring in different emotive sides to this story, having being personally affected by street crime. But Chi-Raq ultimately belongs to Parris, whose gutsy Lysistrata is not only the heart of the feature but a surprisingly moral protagonist – despite being constantly around guns, she is the one shocked enough by the violence to address the issue.

Overall, Chi-Raq is easily Spike Lee’s most daring feature – a highly energetic film that not only shines a light on American gang culture, but puts a feminist spin on pacifism.

Chi-Raq will be in UK cinemas on 2 December.