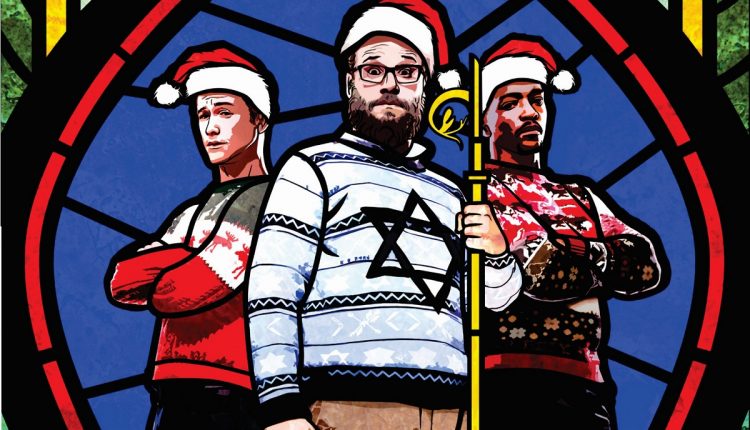 Christmas Cracker: The Night Before (2015)

Now that December has begun, it’s time to start the Christmas viewings. In the past I have managed to watch nothing but actual Christmas movies non-stop, but this year I have decided to do something different. As a youngster, my Christmas viewings were decided by the TV schedules. You would get Christmas movies, absolutely, but you would also get a selection of older films, either musicals or comedies or even something featuring Bogart and/or James Cagney. So up until Christmas Day I am hoping to keep you in a festive mood with a film either classed as a Christmas Cracker or a Christmas Classic. Or a World Cinema Wednesday choice, of course.

Jonathan Levine has been doing quite well for himself for about a decade now, creating a filmography that seems content to give audiences a selection of solidly entertaining, while not actually great, movies. But it’s surprising to find that he’s decided it is time to try his hand at the tricky modern Christmas movie. What isn’t so surprising is the fact that it stars Seth Rogen and Joseph Gordon-Levitt (Levine previously directed both in 50/50) and Anthony Mackie, all having different kinds of fun during a particularly turbulent Christmas Eve.

Our three leads have been close friends for a number of years, going out of their way to have a special time together at Christmas after Ethan (Gordon-Levitt) suffers the loss of his parents. They wear bad sweaters, they sing songs, they get wasted together. One year they stumble upon tickets for a major party entitled The Nutcracker Ball, which then becomes the ultimate goal for them, but one that they never seem to come closer to reaching. Which all leads up to this night, this one final big Christmas outing for the friends. Isaac (Rogen) is about to become a father, Chris (Mackie) is enjoying a successful career in sport, and Ethan knows that this is their last hurrah. Which is why he seizes the opportunity to purloin some tickets to The Nutcracker Ball. Can they all get there? Will they resolve issues that are bubbling away under the surface? And will Isaac survive with his dignity intact, having taken far too many drugs from the box given to him by his loving and understanding partner (Jillian Bell)?

If you don’t like this kind of comedy, the “stoner-bro” comedy that Rogen has made his comfortable home ground, then you’ll find plenty to dislike here. Because that’s what you get, a Christmas film that laces the gingerbread biscuits with a hefty sprinkling of pot. And maybe even some magic mushrooms. There’s some karaoke, a chance to reference the famous piano sequence from Big, a grinch (Ilana Glazer) out to ruin as many Christmases as possible, and an unlikely angel.

The script, co-written by Levine, Kyle Hunter, Ariel Shaffir, and Evan Goldberg, is exactly what you expect. Although you could accuse everyone of going through the motions, everyone does well. Rogen, Mackie, and Gordon-Levitt all wear their flaws on their sleeves, which is the only thing adding any semblance of depth to them. And they’re also generally good guys. The main female characters (Bell, Lizzy Caplan, and Mindy Kaling) are equally decent, although they’re ideally suited to the male characters that they’re interacting with the most. And you get some laughs from Michael Shannon and James Franco, in two very different roles, with more fun provided by the scenes featuring Glazer doing her best to ruin any festive fun.

The Night Before is not going to become a traditional viewing at this time of year, for me anyway, but it’s a good bit of fun while it lasts.