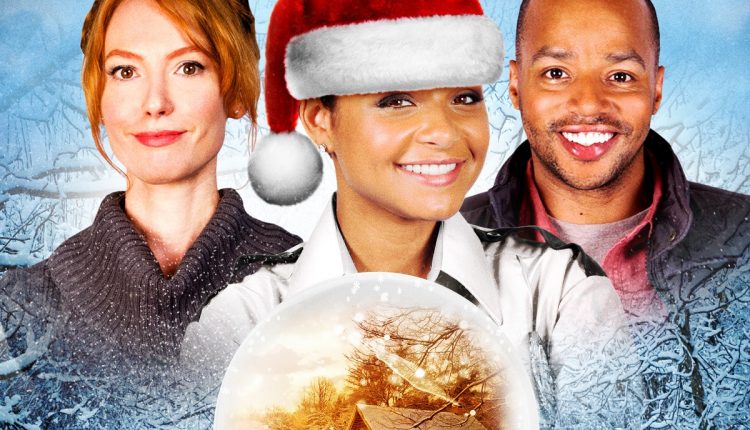 Alicia Witt is Meg, a busy TV executive who is magically transported to a lovely, snow-covered, town and finds herself apparently married to a sweet man (Donald Faison) with two children that she can’t remember bearing. And this all occurs after she has one conversation with a mysterious woman (Christina Milian) and gets hit on the head with a snow globe. It’s not long until she starts a chain of events that threaten to change the town and ruin Christmas for everyone, with the exception of one local businessman (Trevor Donovan).

Directed by Jodi Binstock and written by Naomi L. Selfman, A Snow Globe Christmas is almost your typical TV movie churned out to fill up the schedules at this time of year. It comes from The Asylum, that company still best known to film fans for creature features that range from the likes of Mega Piranha to the Sharknado series. They’ve been helping to fill up overcrowded schedules for some time now, and more power to them for creating what I can only assume is an impressively profitable business model built up from some very humble beginnings.

Which is not to say that this film is any good.

Indeed, even by the standards used to judge other Christmas TV movies, this is a fairly lazy and slapdash bit of entertainment. That’s probably due to the fact that The Asylum always confuse making the most of their limitations with not doing enough to actually hide them, be they artistic, technical, or budgetary. This is a Christmas film that barely feels Christmassy enough, with the seasonal tropes feeling more perfunctory than essential to the story.

It’s lucky that the cast do enough to make things watchable. Witt works hard in her thankless lead role, Faison is a likeable as he always is, Milian gets to have a bit of fun with her mischievous character, and Art LaFleur is good as a cheery man who Witt inadvertently transforms into someone a bit more selfish. Donovan isn’t too effective, but that’s more to do with the weak script than his performance. And everyone else does what is asked of them, nothing more and nothing less.

You get plenty of ad breaks, a score that makes you wish for more moments of silence, and a plot that ties things up in the last few minutes in such a way as to make you feel that Selfman, and Delondra Williams (who helped come up with the story), forgot until the very last minute that viewers would want some kind of proper resolution.

I’m sure this can still be used as background noise while gifts are being wrapped and decorations are being put in place, but it’s certainly not good for anything more than that.