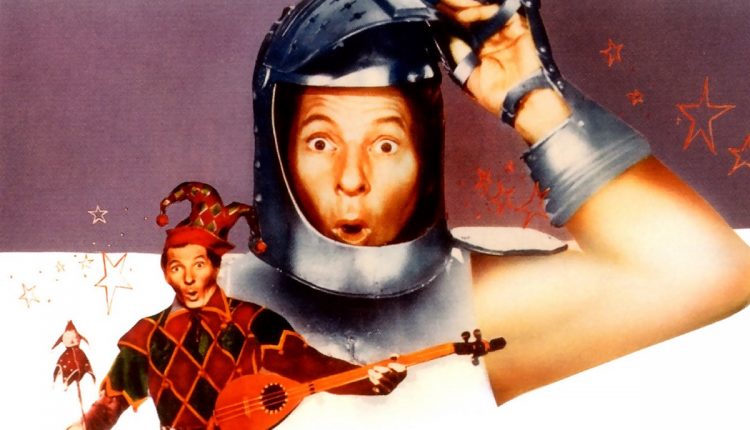 When I was a nipper, Danny Kaye was always one of those friendly faces that I was always aware of. He was involved in a lot of family films that would be aired during the holiday seasons. I could say the same of Doris Day (probably my very first crush). Despite that, I can now only remember two Danny Kaye films that I MAY have actually watched in entirety. One is Hans Christian Anderson (1952), and the other is this film.

Here’s the story of The Court Jester. Kaye plays the titular character, an ex-carnival entertainer now happy to boost morale for the troop working under the Black Fox (think an unofficial Robin Hood). The Black Fox wants to restore the British throne to its rightful heir, a baby with a unique birthmark, and Kaye is tasked with keeping the baby safe, alongside the lovely Glynis John (playing Maid Jean). As they travel the land, the two meet a man who is heading to the castle to be the new court jester. Knocking him out, a plan is quickly made up that involves Kaye taking over the role of the unconscious man, although neither Kaye nor John realise that this jester is also a world-class assassin, hired by Basil Rathbone (playing Lord Ravenhurst) to despatch his enemies. And things grow more complicated from there.

Now here’s the real story of The Court Jester. It starts off with a wonderful title song that references most, or perhaps even all, of the onscreen credits. It features the usual mix of tongue-twistery and physical comedy from Kaye. It has a couple of great songs in the mix. The main character is hypnotised, at one point, into believing that he is a brave lothario, leading to him switching character every time someone clicks their fingers. Get it? Got it. Good. And, of course, the pellet with the poison’s in the vessel with the pestle; the chalice from the palace has the brew that is true. Just remember that and you’ll be fine. Until the chalice from the palace is broken, and then you’ll have to remember that the pellet with the poison is in the flagon with the dragon instead. The brew that is true will be in the vessel with the pestle.

Written and directed by Melvin Frank and Norman Panama, The Court Jester is effortlessly entertaining from start to finish. A lot of that has to do with the charisma and comedic talent of Kaye, but there’s also strong support from Johns, Rathbone, Angela Lansbury (playing a young princess due to be married off by her father), Cecil Parker (the king), and Mildred Natwick (Griselda, she with the power to hypnotise). The plot constantly keeps things feeling possible, even as it all gets potentially sillier and sillier, and the thrills work just as well as the many laughs, and the “vessel with the pestle” routine is something that everyone should see at least once. It, and the entire movie, is an enduring classic.