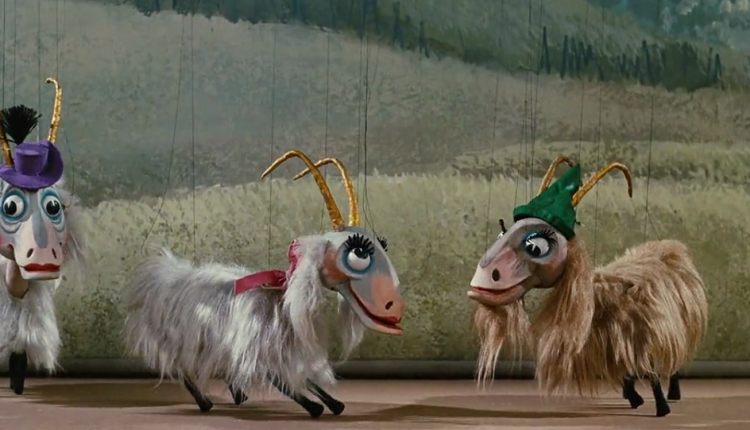 MERRY CHRISTMAS! Yes, I decided that today would be a perfect day for some singing in the Alps. Why pick The Sound Of Music as the final movie choice in this season of Christmas viewings? Well, this film has always been a staple in the TV holiday schedules, no matter what time of year it is. It’s also an absolute treat, truly deserving a place behing the final “advent window”, as it were. And sometimes you just need something to rinse away layers of cynicism that have built up over a year like this one.

Everyone knows this, which makes it a lot easier to review. I could just put some lyrics here, either from “Do-Re-Mi” or “My Favourite Things”, and a lot of people would probably accept that I had done enough to share my love of the film. But I won’t do that, however much I may be tempted. No. I will, instead, remind everyone that this is the tale of a young woman (Maria, played by Julie Andrews) who leaves an Austrian convent to take charge of the children of the Von Trapp family. The head of the Von Trapp family is a stern Captain (Christopher Plummer) who doesn’t take too kindly to the lack of discipline he sees in Maria. But all that may change as she starts to work wonders with the children. Other plot elements include the approach of the Nazis into Austria, a potential new wife for the Captain (played by Eleanor Parker), and a couple of chances for the Von Trapps to showcase their lovely singing voices in public.

Directed by Robert Wise, a man who seemingly didn’t meet many genres he couldn’t master (he certainly produced classics in both the sci-fi and horror genre anyway, aside from this film), The Sound Of Music is often remembered by people with a roll of the eyes and a shake of the head. They know it, they don’t hate it, but they think of it as some horrible mix of cheesy songs and overloaded sweetness. Which isn’t quite how it should be remembered. Yes, Julie Andrews practically emanates sweetness and light, and the plotting for two thirds of the movie is a bit too convenient, with the development of Captain Von Trapp a bit too sudden, if you ask me, but that’s necessary for two reasons. One, this is an upbeat musical (meaning it wouldn’t necessarily work if the lead was, say, someone ported in from a Michael Haneke film. Two, you have to have lighter elements in a film that also features the encroaching evil of The Third Reich. Wise handles everything perfectly, helped by his cast and the screenplay by Ernest Lehman (based on the stage musical, which was based on the book by Maria Von Trapp). And, as with any musical, the real test is just how good the songs are. Rodgers & Hammerstein outdo themselves here. As well as the two already mentioned in the above paragraph, you get classics such as “Maria”, “Sixteen Going On Seventeen”, “The Lonely Goatherd”, “Edelweiss”, and “So Long, Farewell”.

Andrews and Plummer are both excellent in the lead roles, Charmian Carr stands out as the eldest of the Von Trapp children, Liesl, and Parker and Richard Haydn do well in the other main roles, with Haydn portraying the man who wants the whole family to impress a larger audience with their talent.

And that’s about all I need to say. The film speaks for itself, the rather hefty 174-minute runtime practically flying by thanks to the mix of enjoyable characters and singalong favourites, and I encourage even the most jaded to at least visit it once (especially as so many people think they have seen it when they’ve only ever watched certain portions).

P.S. I know that the main picture used above is hardly the first choice anyone would go for to accompany a review of the film. Which is why I chose it.