No exit, government in charge

John Crowley’s Closed Circuit gets you all poised for a fast, exciting legal thriller. It starts literally with a bang, a terrorist’s bomb set off in London’s Borough Market, under the eyes of dozens of surveillance cameras, killing over a hundred people. But it ends with a whimper, and plays out as one long case of coitus interruptus. It’s not even as exciting as James Marsh’s 1990 Belfast story Shadow Dancer. That’s grey and muffled, but at least it has danger and rage in it. Closed Circuit’s climax is a quiet meltdown, a cover-up and a cave-in, despairing acquiescence to state repression in the interest of MI5’s need to hide its worst mistakes. Props to Rebecca Hall for giving energy to her tightly buttoned down role as the Special Advocate who discovers the cover-up and tries to expose it in court. Eric Bana does his best as her former lover and the replacement defence counsel in the case. But what’s this Australian doing playing an English barrister? He lacks the requisite priggishness–er, polish. It’s a bad sign that he gets to exercise his physicality mainly just in rowing solo on the Thames. Other wasted actors are Ciarán Hinds as Bana’s protector, Jim Broadbent as the Attorney General, no less, and Julia Stiles, who jogs in and out as an American journalist who, I’m happy to say, knows stuff.

The Government arrests Erdagun (Denis Moschitto), someone Turkish and seedy (a heroin addict and drug dealer who was arrested in Germany) and plans to try him for masterminding the bombing, mainly because he survived; other suspects died. The first defence lawyer commits suicide, or so they say, and Martin Rose (Bana) is called in to replace him. Claudia Simmons-Howe (Hall) is the Special Advocate allowed access to documents in the case deemed to be too sensitive to reveal in open session. (The film seems to want to say having a double trial, closed and open, in cases involving state secrets violates the defendant’s civil rights.) Once she’s perused them, she can’t talk to Rose. She had this role with the barrister who died. Now she wants out, because she and Rose were lovers. He wants her replaced. But they wind up continuing, thus injecting a bit or sexual tension while rather implausibly getting away with breaking rules of conduct in an intensely overseen government case. 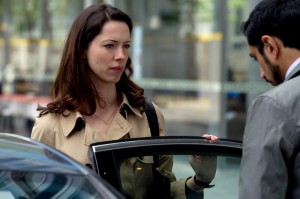 There is a lot of fuss over this pairing, which blossoms into a kind of Mr. and Mrs. North relationship when things get complicated. But I’m suspecting it’s something relatively inessential that eats up too much energy from the story early on. Scenes showing Erdagun, when Simmons-Howe meets with him in prison, and his wife (Pinar Ögün) and son Emir (Hasancan Cifci), who’re being held in a safe house, don’t generate as much tension in the crucial early stages as they should. 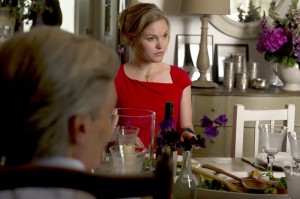 Where this movie does work is in the way it creates an increasingly trapped feeling as it gradually slips out that the government is manipulating things. London’s surveillance cameras make it the most closely watched big city on earth, to begin with. But when Rose finds out he’s being played, it seems every taxi he takes is a setup, and the movie starts us looking at every face that passes him on the street as a possible MI5 plant. Closed Circuit indeed. For once a movie whose metaphorical title is quite apt. 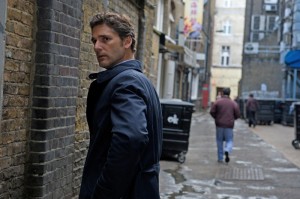 Simmons-Howe has a kind of handler too (Riz Ahmed), who also can’t be trusted, and the MI5 person on the case (Anne-Marie Duff) is a super-meanie. The chill warms for a risky chase at the end to get a key witness to the court, but it all feels hollow because the government, seen as a bit too uniformly nefarious here, seems to pull all the strings. And with the case being so rigged, it makes the film feel rather rigged as well. 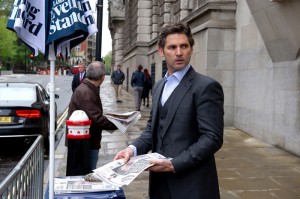 This is a glossy, good-looking film, with strong hints of grandeur and chill London has no trouble delivering, helped by cinematographer Adriano Goldman; and the composer, Joby Talbot, whose music is conventional, but keeps up at least the expectation of thrills. Ultimately, though, this is a movie that, try as it may, feels all dressed up with nowhere to go. Isn’t that true of John Le Carré’s Cold War thrillers too, even his muffled, angry depictions of post-fall-of-the-Soviets malfeasance? In a way, yes. But Le Carré knows how to get maximum mileage from every scene. And he deeply understands how to create interesting characters. Despite Hall’s spunk and Bana’s bulk, Hinds’ dourness and Broadbent’s slimy Establishment charm, it’s hard to care about anybody here. Maybe the kid, Emir — if he’d been given a chance. (At least this movie gave London work to some Turkish actors.) Examples of better movies in this vein: Defense of the Realm, No Way Out; Polanski’s recent The Ghost Writer. Since the screenplay is by Steven Knight, whose credits include Amazing Grace, Dirty Pretty Things, and Eastern Promises, it seems something went slightly awry.