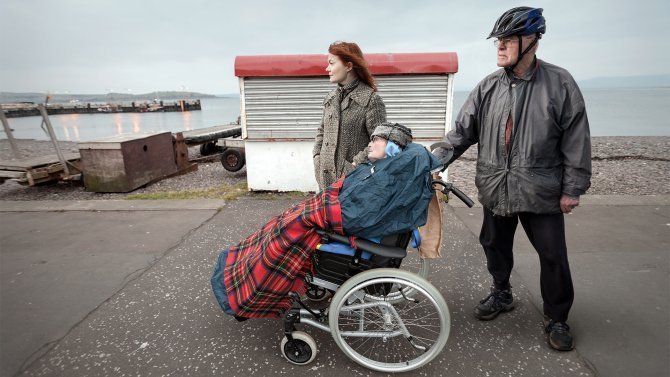 Autobiographical documentaries provide an interesting insight of a life behind closed doors, with TV shows such as Who do you think you are? and 2007’s You Don’t Know You’re Born explores the appeal of undiscovered lives and family pasts.  After being named Best International Feature Documentary at the recent HotDocs 2015, UK filmmaker Karen Guthrie’s latest film looks into the difficulties of intertwining families, and the hardships of growing up in a broken life.

The Closer We Get follows Guthrie as she moves back into her parents’ home, as she cares for her mother Ann following a stroke. The film explores the strained relationship between her parents and the heartache caused from her father Ian’s double life in Africa.

The film is shot with an intimacy that filled with honesty. Guthrie and collaborator Nina Pope captures seemingly mundane family life but with the former’s quiet narration, it makes each development behind the family past increasingly incredulous – Guthrie’s sad, almost melancholic tone sounds resigned to the events that broke her family yet it is unpretentious in nature.

The archive footage of her parents, ranging from her mother before and after her stroke, as well as retrospectives from her father and siblings, subtly shine a new light on the situation without over-dramatisation, and with the film shot from the perspective as a guest in the family home, it reaffirms the naturalness of Guthrie’s conversations with her family, no matter how candid.

Overall, The Closer We Get is sensitive filmmaking, with Guthrie’s careful direction and emotional narrative pulling the heartstrings without too much drama.