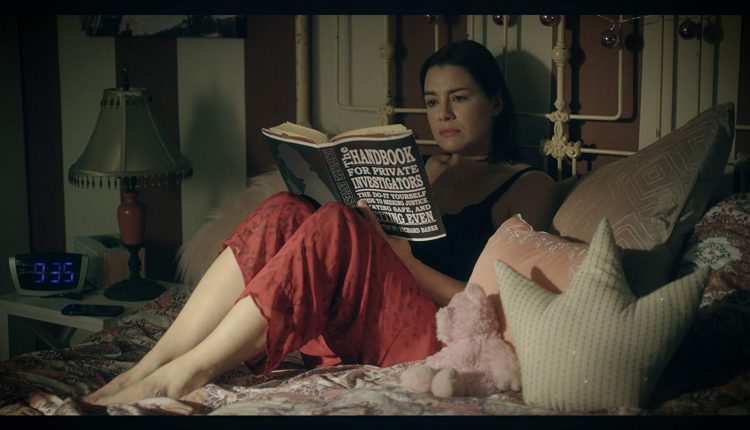 Writer-director Alex Goldberg (“Today Will Be Yesterday Tomorrow”) accomplished something very special with his quirky dark comedy Closure that could have been another run-of-the-mill observation of the West Coast breeziness steeped in the bizarre boundaries of cockeyed characters and superficial attitudes. Indeed, Goldberg surpassed expectations monumentally by concocting an off-kilter caper that ambitiously stimulates with sharpened wit underlined by indescribable poignancy. Gently absurd, thoroughly engaging and distinctively offbeat, the rhythmic flow perpetuated in Closure is infectiously received with off-the-cuff exuberance.

Conversely, there previously have been a few notable cinematic entries that aptly managed to effectively skewer the L.A. landscape with ready-made insanity. Surprisingly, Goldberg’s clever concoction effortlessly taps into the succulent satire with its wry humor that registers with a shifty shadiness provided more convincingly than a Hollywood sidewalk aligned with towering palm trees. Sardonic and manufactured so cheekily in its intriguing nuttiness, Closure is the essence of a flippant fable that refreshingly reinforces its originality of mischievousness.

Midwestern-bred Nina (CatiaOjeda) is on a quest to meet up with her estranged look-a-like sister Carrie en route to Los Angeles following the death of her dementia-ridden mother. Nina’s dearly departed mother has always wanted to know what happened to her other daughter since she took off for California a few years ago. Hence, Nina is willing to reunite with Carrie upon their mother’s deathbed wish.

However, the trip to L.A. was a turbulent one for Nina. Her luggage was lost upon arrival at the airport. Incidentally, the personalized baggage that Nina carries on her shoulders is something that she would gladly want to misplace. Her romantic relationship with fiance Richard went south after many years together. Her insurance job back in Kansas is not what she would call overly exciting. The stressful caretaking duties involving her late mother was exhaustive. Now Nina will find that the eccentricities in L.A.’s perverse playground will make for a trying experience as well.

Naturally, the running gag–and a frothy one at that especially when it echoes the Hollyweird…eh, Hollywood scene–are the flaky folks that Nina encounters during her brief stay as she tries to track down sibling Carrie. Upon meeting Carrie’s flighty New Age spiritual guru/dental assistant roommate Yasmina (Cynthia Addai-Robinson) she learns that her sister had been missing for the last three months and has not been heard from since that time. Nina is offered by Yasmina to stay in Carrie’s room until she can find out what happened to the missing Carrie.

In addition to Yasmina, Nina will touch base with other personalities familiar with her absent sister as she begins to inquire about Carrie’s whereabouts. Among the kooky culprits include bickering couple in sarcastic Jack and snooty Prudence (John Sloan and Milena Govich) that have an open relationship. Later on, Nina meets up with Carrie’s former co-worker in DJ Space Coyote (Demegio Kimbrough) as she discovers her sibling’s dubious employ as a prostitute.

Unfortunately, no one is much help in lending any insight into Carrie’s disappearance. Nina enlists the assistance of a couple of mismatched cops named Franklin and O’Leary (James Andrew Walsh and Michael McCartney) that harbor their brand of peculiar oddities. So it is up to Nina to piecing together the mystery if she ever wants to confront Carrie once and for all. Using some assorted clues from Jack (who reluctantly is used to back up Nina for her mission in finding Carrie) our female amateur sleuth uses her sister’s likeness to infiltrate the club (called “The Club”) where Carrie got paid for tricks.

Thus, Nina starts to undertake Carrie’s role as a sexual date for hire in order to further investigate her sister’s MIA status. Soon, Nina would meet and date the sensible and well-spoken Hugo (Tom Choi)–someone who she ends up liking very much in spite of her agenda to get to the bottom of Carrie’s location. Of course, Nina’s association with Hugo will soon expose her to the deep sinister operations behind The Club that involve the likes of the dastardly financer Iskandar (Marcelo Tubert) and his henchmen to the face of the whole seedy affair overseen from the Superior (played with Iron Lady nastiness by veteran Hollywood actress Dee Wallace).

Overall, Closure is a pure hoot in that it never misses a bouncy beat in slyly ridiculing the L.A. lifestyle and its pretentiousness in people and purpose. Armed with snappy-induced dialogue, observational sight gags, the Hollywood backlot of beach yoga instructors and freelance writers, fragile random romantic relationships and sex cults as well as loony lawbreakers and law enforcers, Goldberg fills to the brim the surreal ridiculousness that he establishes in this cunning comedy. The ribbing of the L.A.-based lunacy is pleasingly perceptive. From the display of rabbit food being passed off as a full course meal to the Pulp Fiction-esque oddballs that weave in and out of Nina’s path in the eternal sunshine, Closure is sheer madness at its giddy core.

As Nina, Ojeda makes for the perfect fish-out-of-water tour guide as she stumbles and bumbles into this crafty farce where the personalities and places in La La Land want to make one give the side-eye in absolute hilarity. The comic relief is plentiful as the supporting cast compliment the pesky proceedings accordingly. Goldberg’s indie darling Closure is delightfully cogent in its peppered presentation making it one of the most robust and refreshing comedies released this year.